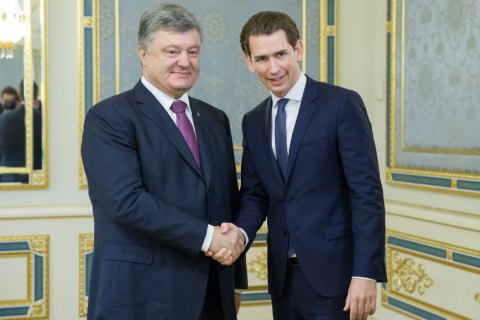 President Petro Poroshenko during a meeting with the OSCE Chairman-in-Office, Federal Minister for Europe, Integration and Foreign Affairs of Austria Sebastian Kurtz, called for the intensification of consultations in Vienna on the deployment of the OSCE's armed police mission in Donbas.

Poroshenko noted that Russia continues to flagrantly violate the Minsk accords. Civilian objects are increasingly becoming targets for shelling with the use of prohibited weapons, said Poroshenko as quoted by presidential website.

Poroshenko stressed the need to strengthen the technical capabilities of the Mission, which will improve the security of OSCE personnel, in particular by expanding the possibilities for remote monitoring.

The president noted the steps taken by the Kremlin to integrate the captured Donbas enterprises into the Russian economy.

"This not just hinders the implementation of the Minsk agreements, but also confirms that the Russian side prepared in advance for the expropriation of Ukrainian enterprises in the occupied territories," Poroshenko emphasized.

He called on Kurtz to react with all possible means to Moscow's violation of the rights of Ukrainian citizens in the occupied territories. In particular, Poroshenko drew attention to blocking the release of hostages in Donbas, even despite the completion by the Ukrainian side of the so-called verification procedure.

The issue of de-occupation of the Crimea was discussed separately. Poroshenko welcomed the decision of the Committee of Permanent Representatives of the EU to extend the "Crimean package" of sanctions for the year and expressed the hope that it will be supported at the level of the EU foreign ministers on June 19.

Poroshenko expressed confidence that Austria will proceed from respect for the rule of law both within the framework of the OSCE chairmanship and regarding preservation and, if necessary, strengthening of EU economic and sectoral sanctions against the Russian Federation.

Poroshenko also congratulated Kurtz on his election as chairman of the Austrian People's Party.

Earlier Kurtz promised that during his chairmanship in the OSCE in 2017, Austria will make efforts to mitigate EU sanctions against Russia. The Austrian foreign minister stressed the need to change the trend in relations with Russia and the withdrawal from thinking in the categories of the "cold war". Instead, according to Kurtz, sanctions should have been softened step by step in response to "every positive change on the ground".