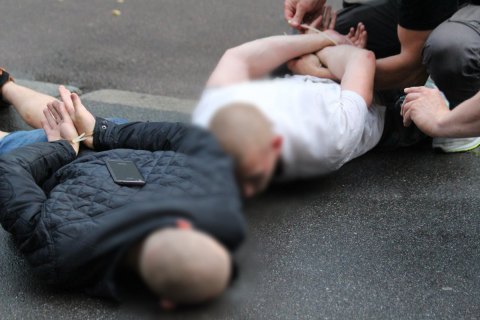 The Security Service of Ukraine prevented the arson of the office of the Fatherland party in Kyiv.

"The SBU received operational information about the intentions of the Russian special services to stir massive protest actions in Ukraine. For this purpose, persons who are hiding in the territory of the Russian Federation from Ukrainian justice were tasked with organizing an attack using explosive devices and incendiary mixtures at the office of the Fatherland party in Kyiv," the head of the department of national security of the SBU Viktor Kononenko told a briefing on Monday, 26 June.

Three executors of this order were detained near the party's office at Turivska St., he added.

According to Kononenko, the conflict was supposed to ignite mass protests during the celebration of the Constitution Day.

The SBU said in a later statement that the service had operational data on the preparation of the terrorist act and has informed the president about them. The have SBU properly informed the leadership and security department of the Fatherland about the planned provocations.

At 04:33 on Monday, SBU operatives held three suspects who attempted throwing Molotov cocktails into the office of the Fatherland.

The detainees were the residents of Lviv Region. They had been offered money for the execution of the order.

Two of the suspect were earlier involved in the blocking of the Lviv–Rava-Russka motorway in March, another one was noticed among the organisers of protests in Kyiv last month.

On the night of June 8, an unknown threw an explosive device on the territory of the US Embassy in Kyiv. The explosion caused no casualties or damages.