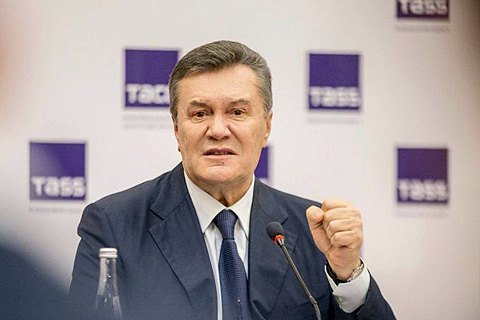 The Prosecutor-General's Office of Ukraine (PGO) has informed former President Viktor Yanukovych and ex-Minister of Justice Oleksandr Lavrynovych that they are suspected of seizing state power.

The case concerns the amendment of the Constitution in 2010.

The PGO said in a statement on 6 September that its department of special investigations is investigating the case of the 2010 constitutional coup which resulted in the seizure of state power by expanding the powers of the president of Ukraine by unconstitutional means and narrowing the role and powers of the parliament and the government.

"On the basis of the evidence collected, former President Viktor Yanukovych and former Justice Minister Oleksandr Lavrynovych were declared suspects under Article 109 Part 1 of the Criminal Code Ukraine for committing, together with other persons, the seizure of state power, including through the adoption of the illegal amendment of the current Constitution of Ukraine by entering into the Unified State Register of Regulatory Acts the text of the Constitution of Ukraine in its 1996 wording and its official publication, which was not approved by Ukraine's single legislative body, the Supreme Council of Ukraine," Prosecutor-General Yuriy Lutsenko said on Facebook.

In March 2014, the PGO opened the case against Yanukovych over the unconstitutional seizure of power through the change of the constitution in 2010. Defendants in the case included the judges of the Constitutional Court who issued the resolution. In May, it became clear that the PGO failed to collect evidence to have the judges prosecuted.

After the overthrow of Yanukovych, parliament reinstated the 2004 constitution.

Yanukovych is also suspected of committing high treason on 1 March 2014, when he, while staying in Russia, in a written statement asked the president of the Russian Federation to use Russian troops on the territory of Ukraine. As a result, Ukraine lost control of Crimea and state property worth more than 1,080 trillion hryvnyas. The case is being heard in court.