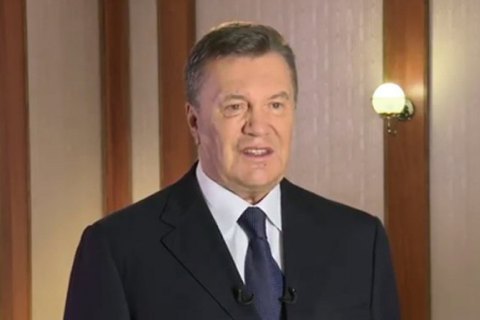 Switzerland requires evidence to hand over to Ukraine the gold misappropriated and removed from the country by the entourage of former President Viktor Yanukovych, the TSN news service of the Ukrainian One Plus One Tv channel has said, quoting the Federal Department of Foreign Affairs of Switzerland.

"The return of frozen assets of the Ukrainian authorities can occur only after their illegal origin is confirmed in court. In the meantime, Ukrainian judicial authorities so far failed to issue a judicial decision on the confiscation of these assets," the ministry said.

Switzerland has not provided information on the exact amount of frozen assets.

"To date, Ukrainian assets worth about 70m Swiss francs have been frozen in Switzerland. The assessment of the amount can change depending on a number of criteria, such as currency fluctuations, cost of assets, changes in the list of persons subject to freezing, partial release of frozen assets, etc.," it said.

The department stated that the Prosecutor-General's Office of Ukraine can count on the assistance provided by the International Centre for Asset Recovery financed by Switzerland, Liechtenstein and the United Kingdom.

"The Federal Prosecutor's Office, as a responsible law-enforcement agency in Switzerland, has information about this case. However, on the basis of official secrecy and investigations, the Federal Prosecutor's Office cannot comment on any current criminal cases. As usual, the presumption of innocence is applied to all those involved," the Swiss authorities said in response to a request of Ukrainian PGO.

On 4 September, the PGO reported that Switzerland arrested more than 500 kg of gold belonging to persons close to former Ukrainian president Yanukovych.

In April, a court confiscated 1.5bn dollars owned by Yanukovych and his entourage.