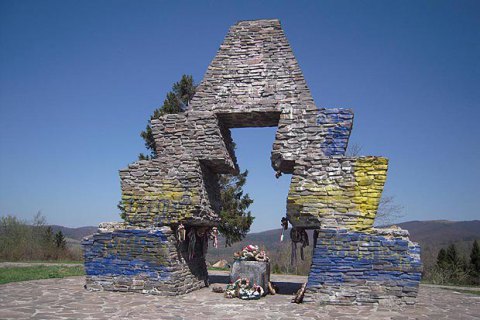 On 1 October, police detained serial terrorists who planned to blow up a Hungarian monument at the Veretskyy Pass in Transcarpathian Region, Interior Minister Arsen Avakov said in a Facebook statement on 2 October.

The minister said police believed the detained had committed at least eight similar crimes in the past.

Avakov said that the criminal ring consisting of residents of Cherkasy Region was detained not far from the western border of Ukraine. A special criminal investigation group confiscated several RGD-5 grenades and an explosive device during the arrest.

The investigation says there are serious reasons to believe that this group is responsible for nine similar crimes committed in 2016-17 and aimed at inciting xenophobia, religious intolerance and international conflicts, Avakov wrote.

Investigators believe that the members of the group desecrated the synagogue in Chernivtsi (19 November 2016), desecrated the grave of Rabbi Nachman in Uman (21 December 2016), threw a grenade at the US Embassy backyard (8 June 2017), tried to set fire to a synagogue in Lviv (30 June 2017), threw an explosive device at the Polish Consulate in Lutsk (10 July 2017), threw a grenade in Hrushevskyy St. in Kyiv (24 August 2017), tried to blow up a monument to Donbas war veterans in Kyiv (24 August 2017), and threw a grenade in Uman, wounding several Jewish pilgrims (21 September 2017)

"The perpetrators of the listed crimes belong to the so-called organized crime group Torpedoes. They have long been under the scrutiny of law enforcers and were suspected of involvement in a number of other crimes. The detainees and their leader are believed to have been controlled by former Party of Regions MPs from Cherkasy Region, Volodymyr Oliynyk and Serhiy Tulub," Avakov stated.