Gorshenin Institute and the representative office of Friedrich Ebert Foundation Ukraine & Belarus unveiled on Friday, 29 September, the results of a most recent sociological survey "Ukrainian society and European values." The discussion was participated by Marcel Röthig, Director of the Friedrich Ebert Foundation in Ukraine & Belarus; Svitlana Baluk, expert of Gorshenin Institute, Yulia Bidenko, PhD in Political Science, associate professor of the Political Science Department of Kharkiv Karazin State University and an expert of the initiative Team Europe Kharkiv. 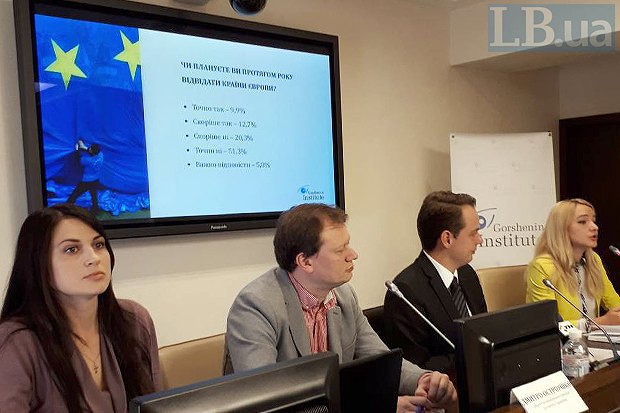 Director of the Ebert Foundation bureau for Ukraine & Belarus Marcel Röthig noted that the sociological study had a practical sense. "It was important to understand what European values mean for Ukrainians, whether they have any similarity with the Europeans and what is the difference," Rotig stressed.

"Apparently, peace is valued higher in Ukraine than in Europe on the whole, particularly in Germany. For our grandfathers and grandmothers who remembered the war, the value of peace was also higher. Such results were expected for Ukraine, a country in war. In this regard, the Ukrainians are identical with the EU, which was created to preserve peace through economic cooperation."

"It would be good to conduct a similar survey in a few years in order to understand how these sentiments change. For me, it would be important to continue the work that we have begun, and I believe that this study is at its initial stage," Röthig said.

Meanwhile, the expert stressed that Ukraine's membership in the EU is a very distant future.

"Associate member status gives Ukraine the opportunity to get all technical assistance available. However, even if we imagine that the harmonization of the laws and everything else is in place, and Ukraine is in the EU, membership issues will still arise. Practice shows that even EU members face membership issues. If you look at European solidarity, Germany accepts millions of refugees while some countries do not want to accept any, so the question of European values should be asked every day, regardless of whether a country is a member of the EU or not," Röthig stressed.

The study was held in April-June 2017, by the method of focus groups and questionnaire interviews. It was aimed to find out how Ukrainians are perceiving European values. Most Ukrainians (51.6%) believe that Ukraine should integrate into the European Union, while 10.2% favor close cooperation with the Customs Union of the Eurasian Economic Union. At the same time 23.3% of respondents stated against integration with both the EU and the CU, while 8.8% could not answer the questions. 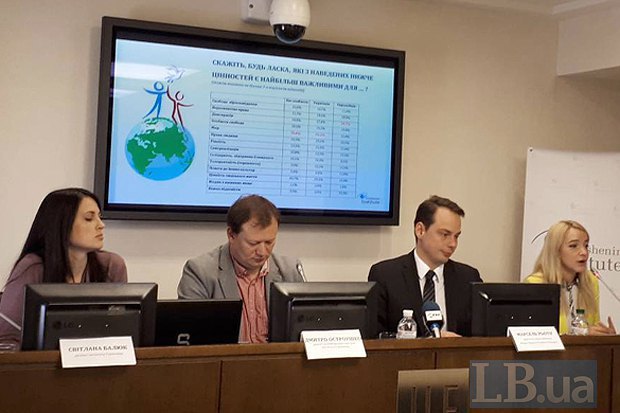 "Notably, the vast majority of respondents in the western region of Ukraine (77.9%) support rapprochement with the EU; in the north of the country – every second (50.5%); and roughly one in three in other regions support the idea (east – 38.2%, centre – 37.8%, south – 32.7%). If we compare this with the Gorshenin Institute survey conducted nearly ten years ago, we shall see a significant drop in the number of Ukrainians supporting integration with the Customs Union. After 2014 this figure has dropped almost twice (from 32.4% to 18.8%) because of the strained relations with Russia, and now is at 10.2%," said Svitlana Baluk, an expert of Gorshenin Institute.

"At the same time, not only the number of supporters of the EU soared from 28.4% to 51.6%, but also the number of those opposing any foreign political integration processes increased significantly during the reporting period from 7.2% to 25.4%). It is indicative that the group supporting the integration of the EU has grown at the expense of those who had previously favoured Customs Union. These are realists who are ready to accept the reality and do not see such a perspective after the Russian aggression. "

In turn, an assistant professor of political science at Kharkiv Karazin University, Yuliya Bidenko, said the results of a study were optimistic.

"Comparing these results with the results of the Eurobarometer, a survey conducted by the European Commission, I see that our society today is following the trend of South Europe, which significantly differs us from our northern and eastern neighbours," she said.