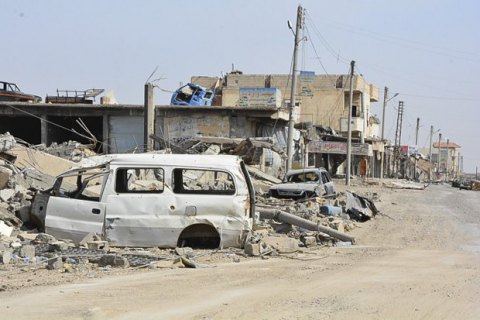 The Security Service of Ukraine (SBU) has identified almost 40 citizens of Ukraine in a Russian private military company known as the Wagner Group, according to Donbass.Realii website.

"The Security Service of Ukraine has information that when the contingent of the so-callled Wagner PMC to be sent to Syria was formed, there was a separate group of people originating from Ukraine, which was notionally called the Carpathians group," the head of the SBU chairman's office, Ihor Huskov, said.

"This is the attacking core. People who have had combat experience in Donbas are sent into the thick of it. The Carpathians-Spring goes first. I do not know why but they are always sent first like cannon fodder," a former militant of the self-proclaim Donetsk People's Republic, Mykhaylo Polynkov, said in an interview with separatist media.

According to the Russian website Fontanka, the Carpathians unit was formed to carry out acts of sabotage in the rear of the Ukrainian army. But this idea was dropped because of their poor training and they were sent to Syria.

In 2017, the group joined the Vesna unit which had 100-150 people. Apart from Ukrainians, there were residents of the "Cossack" regions of Russia and 15-20 Chechens.

It is not clear how many Ukrainians were killed in Syria. The SBU knows about the death of three Ukrainians in March-April 2016. These are Eduard Prykhodko from Horlivka, Oleksandr Konashenkov from Novohradivka and Oleksandr Kyyashko from Donetsk (all three from Donbas).

However, the death toll is likely to be higher and include not only Donbas residents.

"Having met the guys who liberated Palmyra, I heard a detail that 11 Ukrainians were killed during the liberation of Palmyra. A clarifying question: were these Ukrainian citizens from the area controlled by the so-called Luhansk and Donetsk people's republics? No, from the depth of Ukraine. People who had some problems with the law in Ukraine, disappeared in Russia and found shelter with the so-called Wagner PMC," Novaya Gazeta journalist Irek Murtazin said.

The Wagner Group was established by Russian reserve Col Dmitriy Utkin in 2014. Its mercenaries initially fought alongside pro-Russian militants in Donbas and then went to Syria. The Russian Defence Ministry does not confirm that Wagner's fighters have been taking part in the operation in Syria.

The group is believed to be associated with Russian businessman Yevgeniy Prigozhin, also known as "Putin's cook". Earlier, Utkin's full namesake was appointed the director general of Concord Management and Consulting, the company which manages Prigozhin's restaurant business. The businessman denies any connection with the Wagner Group.