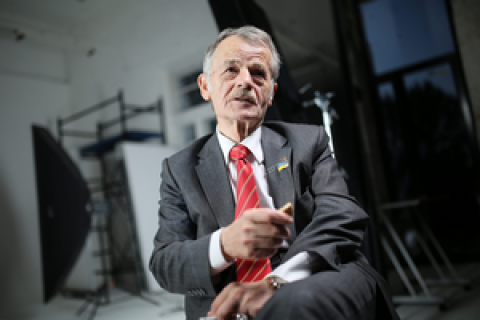 Russia has turned occupied Crimea into a military base and deployed nuclear weapons there, Crimean Tatar leader Mustafa Dzhemilyev has said on the air of the propresidential news-based 5 Kanal TV.

"Crimea has indeed turned into a (military – Ed.) base. It is even more painful for us since it affects the environment. This military strategic facility, Tavryda, where all the greenery is being cut down. If they find any artifacts, they take them away. They shoveled up everything and sifted it through," he said.

He said that two independent sources told him that Russia had placed six nuclear warheads in occupied Crimea.

"As for nuclear warheads. It is surprising that neither NATO, nor our foreign intelligence is clearly unaware. Does it mean that Crimean Tatar intelligence is stronger than any other? We received weekly updates about Crimea: what equipment they have received, what movements they have made. A week ago, I received a confirmation by the level of radiation for the areas where they can be," he said.

Last summer, the chief of the Ukrainian Armed Forces' General Staff, Viktor Muzhenko, said that Russia was restoring nuclear arms storage facilities in Crimea. There was no information on the relocation of nuclear weapons at the time.

In December 2016, Dzhemilyev said that Russia had brought nuclear weapons to Crimea.