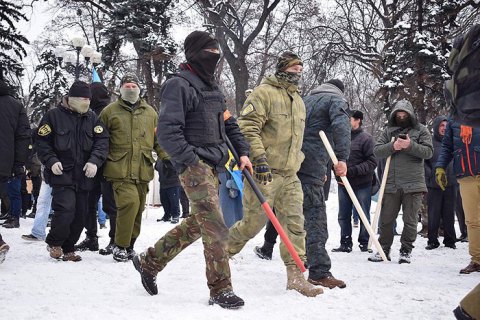 The chief of the Ukrainian Interior Ministry's media liaison office, Artem Shevchenko, has said that 13 police officers have been injured in clashes outside the Ukrainian parliament.

They "received injuries of varying severity," he told journalists.

However, he did not specify whether there were injured among the protesters, nine of whom were detained.

The scuffles broke out on the morning of 27 February as parliament was hearing a number of important bills. Police pushed back the protesters and snatched tires they were about to set on fire. Several protesters threw smoke bombs in response. Police proceeded towards the tent camp, which was pitched in front of the parliament by Mikheil Saakashvili's Movement of New Forces in 2017. Those who were in tents confronted police with sticks and hurled bottles at them.

Shevchenko noted that the police were identifying the detainees, as well as the purpose of their stay outside the parliament's building.

According to him, after the previous fatal incidents outside the parliament when National Guard servicemen were killed in clashes with protesters, police would react "to violations of the law, namely to the throwing of tires, stones and petrol bombs".