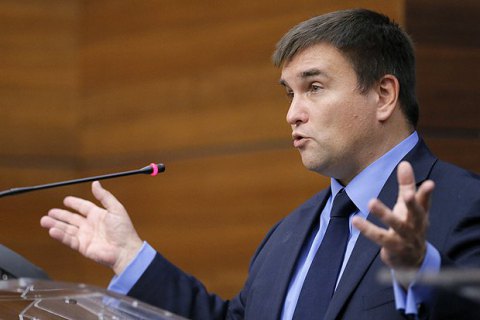 Ukrainian Foreign Minister Pavlo Klimkin has said Ukraine is ready to assist the United Kingdom in investigating the poisoning of former Russian spy Sergei Skripal and his daughter. "The United Kingdom is currently conducting an investigation. Of course, it will be completed. It is already determined that chemicals produced in Russia were used in the poisoning. If the fact is proven, and I am sure it will, Russia is behind this. Who was engaged in chemical terrorism and chemical weapons in the world – Syria, Iraq, Saddam Hussein, North Korea, in Malaysia – remember when the [North Korean] dictator's brother was killed there, and now Russia. Here is the company: Syria, Iraq, North Korea and, of course, Russia," he told journalists, an UNIAN correspondent reports.

"Therefore, we stand by Great Britain. If some of our assistance, expert or other help, is required, of course, we will provide it. I will give Boris Johnson a call to repeat this, although we have sent this message already," Klimkin added.

As UNIAN reported earlier, 66-year-old retired military intelligence officer Sergei Skripal and his daughter Julia, 33, were found slumped on a bench in the centre of Salisbury. They remain in a critical but stable condition. Skripal was convicted by the Russian government of passing secrets to MI6 in 2004, but given refuge in the UK in 2010 as part of a "spy swap." On 13 March 2018, British Prime Minister Theresa May said Skripal and his daughter had been poisoned by a military-grade nerve agent of a type developed by Russia. Russia, in turn, said it would only cooperate with Britain on the investigation into the poisoning case if it receives samples of the nerve agent that is believed to have been used.