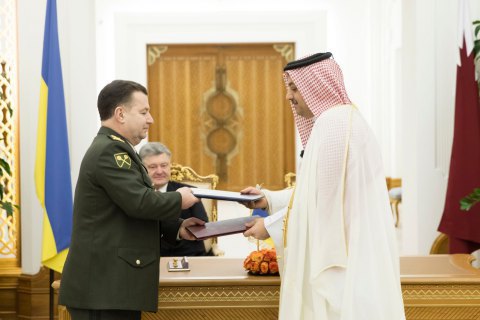 The Cabinet of Ministers of Ukraine and the government of the State of Qatar have signed an agreement on military and technical cooperation between the two countries, the president’s press service has reported.

“In the presence of President of Ukraine Petro Poroshenko and Emir of Qatar Sheikh Tamim bin Hamad Al Thani, an agreement was signed between the Cabinet of Ministers of Ukraine and the Government of the State of Qatar on military-technical cooperation,” reads the report.

According to the president’s press service, the signing of the document will promote the mutually beneficial and long-term cooperation between the two states in the military and technical sector with the use of the latest scientific and technical achievements in the defense industry.

“The document will promote the strengthening of friendly relations between Ukraine and Qatar aimed at improving the defense capabilities of the two states,” reads the report.

As earlier reported, President Petro Poroshenko is currently on an official visit to the State of Qatar.