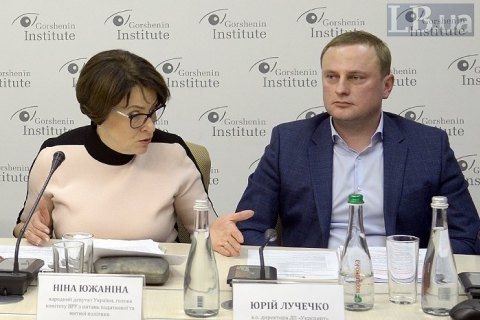 Ukraine needs to implement the recommendations of the Organization for Economic Cooperation and Development (OECD) to combat the erosion of the tax base, the chairman of the parliamentary committee for tax and customs policy, MP Nina Yuzhanina, said at a roundtable "Deregulation against 'gray zones' in Ukrainian business" organized by Gorshenin Institute.

She recalled that the OECD had issued its recommendations in 2013.

"We need to fight the erosion of the tax base. In the near future, we will have to take all the difficult steps that the world offers us in order not to avoid becoming a blacklisted country with which others will be very reluctant to have economic relations," Yuzhanina said.

However, the MP added that Ukrainian peculiarities should also be taken into account.

The acting director of the state-owned spirit company Ukrspyrt, Yuriy Luchechko, suggested the law on diversification of excise duties should be revised.

"Today Ukraine has a universal excise tax, that is, everything related to alcohol or alcohol-containing substances is fully taxed at the rate of 100%, 1,260 hryvnyas. Although alcohol is taxed under zero excise duty in the entire civilized world," Luchechko said.

"The alcohol industry is one of the most 'grayest', you can even say more 'blackest' industries. Spirit companies are in the risk zone, and the legal framework in this area has not fully regulated," Luchechko added.

According to him, Ukraine has enough resources to revive its economy on its own. In particular, he suggested that the requirement to use biofuel in addition to regular one will contribute to the development of the grain processing sector and will launch a national biofuel market. The relevant bill has been submitted to parliament.

"We need to create the most comfortable conditions for the producer to be able to process Ukrainian raw materials domestically," Luchechko summed up.