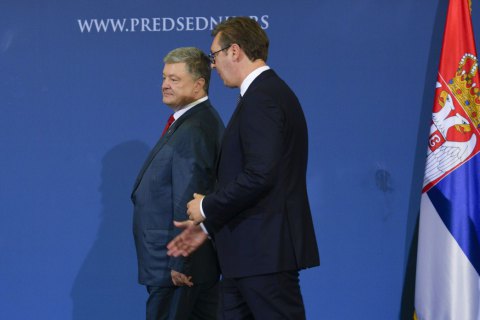 Ukrainian President Petro Poroshenko, who is on an official visit to Kosovo, has said that Ukraine does not recognise Kosovo’s independence and hopes that this problem will be settled with regard to the Serbia’s interests.

Speaking at a joint briefing with Serbian President Aleksandar Vucic, he said: “We respect the territorial integrity and sovereignty of Serbia. We have not recognised Kosovo, proceeding from the position that a compromise taking into account Serbia’s interests should be found to the Kosovo problem.”

He added that Serbia similarly does not recognise Crimea’s annexation by the Russian Federation.

Ukraine hopes for Serbia’s support for the deployment of a peacekeeping mission in Donbas, he said.

Kosovo unilaterally proclaimed independence from Serbia in February 2008. It has been recognised by over 110 countries of the world, including the USA and most EU member states.

Ukraine has not recognised Kosovo’s independence and has no diplomatic relations with the region.