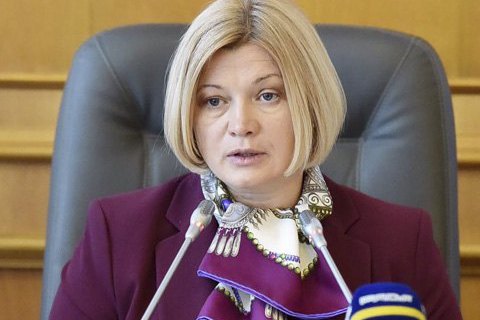 Speaking at a briefing on Monday, 2 July, Herashchenko said she was authorized by the Ukrainian special services to disclose the names of those "whom we are ready to transfer to Russia for the release of such Ukrainians as [Oleh] Sentsov, [Oleksandr] Kolchenko, [Roman] Sushchenko, [Pavlo] Hryb, [Volodymyr] Balukh, [Yevhen] Panov and those guys who are held in the occupied territory," an UNIAN correspondent reports.

According to UNIAN, all surnames are reproduced as heard, so misspellings of the names are possible. Herashchenko said the listed individuals "are convicted of preparing terrorist acts in Odesa, Kharkiv, Kyiv, Kherson, or for taking part in hostilities in Donbas, or they are under prosecution." Herashchenko said: "Take yours, give the Ukrainians back."