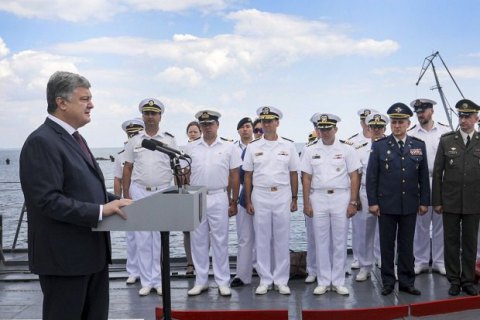 President Petro Poroshenko has said that after the Russian annexation of Crimea, the military-strategic situation in the Black Sea region became very tense.

"The military-strategic situation in the Black Sea region is very tense now, unfortunately. [This happened] after the illegal annexation of Crimea by the Russian Federation, an aggressor country, which was clearly defined in the final documents of the NATO Summit, where Ukraine also participated," the president said during a working visit to Odesa where he inspected the course of the Sea Breeze 2018 international exercise.

"After the illegal annexation of Crimea, we see a sharp increase in the escalation of pressure. Russia has dramatically increased its military grouping in the illegally occupied territory. For the first time, there is a striking aviation, state-of-the-art missiles and anti-aircraft systems. We see the composition of the Black Sea Fleet of Russia illegally located in the annexed Ukrainian Sevastopol, reinforced by submarines and new warships, armed with long-range missiles. The ship group of the aggressor country is significantly reinforced in the Sea of Azov," he said.

He recalled that Russia began illegally stopping and searching ships – both Ukrainian and foreign ones - heading towards Ukrainian ports in the Sea of Azov.

"We see that this is being done to block Ukraine in the Sea of Azov. To escalate tension, probably, to conduct a military attack on Mariupol, where the export of ferrous metallurgy of Ukraine is carried out, organize attacks on other ports of the Sea of Azov," he said.