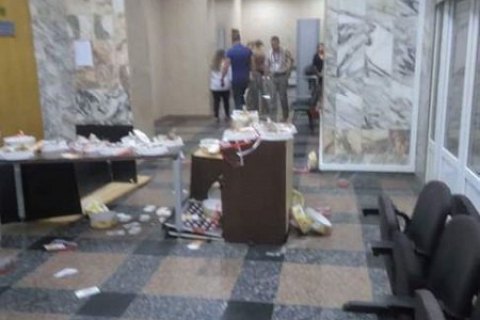 Unidentified individuals have stormed the office of the National Anticorruption Bureau of Ukraine (NABU) in Kyiv and caused havoc there, NABU director Artem Sytnyk has said.

He explained that people who were holding a rally outside the NABU office sneaked into the ground floor, pushed security details aside and ripped the place apart breaking furniture and throwing cakes all over the floor.

Police did not react to the incident.

The troublemakers did not reach deep into the office.

The NABU beefed up the security because of the incident.

Sytnyk connected the riot to the coming meeting of the disciplinary commission on the head of the Special Anticorruption Prosecutor's Office (SAPO), Nazar Kholodnytskyy, due on 24 July.

He suggested the act had been organized by supporters of the Interior Ministry.

The troublemakers have already left the office.

Earlier, the head of the Centre for Counteraction to Corruption, Vitaliy Shabunin, got sprinkled with brilliant green in the street outside the SAPO. Several Roshen cakes were thrown at him.