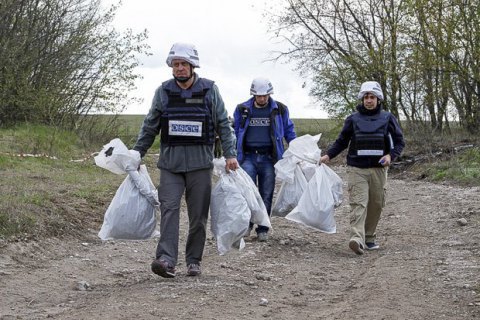 Internal documents of the OSCE Special Monitoring Mission (SMM) in Ukraine have been leaked to the internal intelligence service of the Russian Federal Security Service (FSB), ARD Magazine Fakt has said.

The documents are the mission's internal reports on the situation in occupied Donbas and communication by SMM Principal Deputy Chief Monitor Alexander Hug said.

Among other things, there were short dossiers with information about mission employees, such as their marital status, health status. Personal habits and preferences were also recorded in the dossiers, including details of preferred types of women, alcohol vulnerabilities and the financial situation.

According to the magazine's research, the documents may have been forwarded to Russian agents by one of the OSCE mission staff.

"We are also very concerned about any breach of our security," Hug said. The OSCE will check the situation and take due measures, he said.

The OSCE also confirmed that it was aware of the Fakt findings to be aired on 17 July. However, it said it could not comment on it without verification.

The OSCE SMM has been working in Donbas since 2014. Despite their observer status, OSCE representatives were noticed to be on friendly terms with pro-Russian militants. For example, in 2016, two observers attended a wedding of Luhansk separatists. Despite the OSCE pledge to dismiss them, they are still working for the organization. The number of Russian representatives in the mission increased significantly in 2016-17.