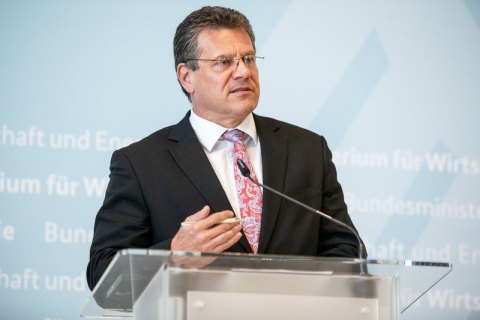 A group of high-level experts will meet in the middle of September 2018 to discuss gas transit shipments via Ukraine after 2019, Vice-President of the European Commission for the Energy Union Maros Sefcovic has said, according to Interfax-Ukraine.

"This has been a long but a productive day. I am pleased to announce that today, we have managed to establish a trilateral process with Russia and Ukraine. In other words, we have a joint agreement that today's meeting was not a one-off exercise," he said after the trilateral talks of the EU, Ukraine and Russia in Berlin on Tuesday, July 17, adding that consensus was reached to continue talks this autumn.

According to Sefcovic, a group of high-level experts will meet in the middle of September. Among the topics for expert discussion are ways in which the EU law applied in Ukraine would impact on the future transit contract and the tariff setting mechanism laid in it, as well as the issue of singling out a certified transmission system operator of Ukraine's gas transportation system from the structure of NJSC Naftogaz of Ukraine, which should become a party to the contract.

"All three sides will now mandate their high-level experts to work on [the] issues. They should meet in mid-September. This will prepare grounds for the next trilateral meeting at the political level that should take place in the course of October. In fact, this will be the frequency of our trilateral talks – approximately six to eight weeks," he said.

"We have also agreed that we need to separate old and new issues," he said. "You all know the fundamental question – whether on 1 January 2020, we will have an agreement on the long-term transit of Russian gas to the EU through Ukraine in a commercially viable manner. Therefore, I appreciate the high-level participation from both, Russia and Ukraine, which was necessary to start this process going – I hope that we will continue to see a firm commitment on both sides to reach an agreement at the end of this process."