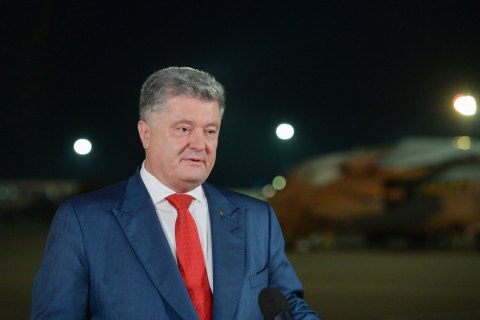 Ukrainian President Petro Poroshenko has issued a special statement to welcome the Ecumenical Patriarchate's decision to grant autocephaly to the Ukrainian Church.

The following is the text of Poroshenko's statement in English published by his office:

The Lord saw the struggle of the Ukrainian people for their independence. He heard our prayers. He properly estimated our labour. It became so desirable for Him to have His All-Holiness Ecumenical Patriarch Bartholomew and the Holy Synod of the Mother Church of Constantinople to declare the dreamed and long-awaited "yes", for which we fought for a long time.

There will be Autocephalous Orthodox Church of Ukraine.

The decision of the Ecumenical Patriarch and the Holy Synod has finally dispelled the imperial illusions and chauvinistic fantasies of Moscow, which were not supported by any legal church document - about Ukraine as so-called "canonical territory of the Russian Church". It was in 1924 when the Ecumenical Patriarchate acknowledged the fact that the so-called "transition" of the Kyiv Metropolitan in the possession of Moscow took place "not by the canonical rules". And today the Holy Synod confirmed this position once again.

World Orthodoxy, as His All-Holiness Bartholomew once wrote, is a "constellation of independent and equal national churches". And finally, my dear friends, our Ukrainian star will shine in this constellation. The decision to grant Autocephaly has already been taken. I emphasize, that the decision to grant Autocephaly to Ukraine has been approved and confirmed once again.

By the work of God, their own Local Churches have been set up in all the Orthodox states that have won their independence. This happened in Bulgaria, in Greece, in Georgia, in Serbia, in Cyprus, in Romania, in Russia. Now our State of Ukraine is joining their ranks.

Tomos is actually another Act of Declaration of Independence of Ukraine. The empire is losing one of the last levers of influence on its former colony.

I am grateful to Patriarch Filaret and all the Hierarchs of the Ukrainian Orthodox Church of Kyiv Patriarchate, Metropolitan Macariy and the Bishops of the Ukrainian Autocephalous Orthodox Church for the spirit of unity which they demonstrated, and for their unanimous appeal to the Ecumenical Patriarch. I congratulate both Leaders on the fact that finally all the Moscow charges on them have been lifted. They have been recognized as the Canonical Bishops.

I want to express my special gratitude to the Verkhovna Rada of Ukraine, which supported my appeal to the Ecumenical Patriarch concerning the establishment of the Autocephalous Orthodox Church and the provision of Autocephaly to the Ukrainian Church with the abundance of votes.

I want to thank every participant of the Procession on July 28, and all Ukrainians who strive for the Autocephalous Church and pray for it.

Altogether, we bow down to His All-Holiness Bartholomew for his care for Ukraine.

Your All-Holiness, Ukraine is looking forward to your pastoral visit to the people, which was baptized during the time of the Great Prince Vladimir.

Today we received the Autocephaly, and after the Council, the Primate of the Ukrainian Local Orthodox Church will obtain Tomos.

The Ukrainian government guarantees the full respect for religious freedom for the believers of all denominations. There is no state church, we never had it and there will never be one. And nobody will be "invited by force" to the Orthodox Church consecrated with Tomos.

Once again I emphasize that this is a matter of free choice for each believer.

The joint creation of an independent church cannot be the basis for discord, for confrontation, for violence. We certainly can't let it happen. On the opposite side, it is a road to peace, comfort and understanding.

As soon as you see people who will call up to take the Laurel, monastery or temple by force, you should know - they are the agents of Moscow. As the goal of the Kremlin is to fuel the religious war in Ukraine. And this is definitely not my plan, not the plan of the Ukrainian people and not the plan of the State of Ukraine.

I sincerely congratulate you on this very grand historical event, and I am very grateful for the massive support of the idea that came about.

I congratulate everyone on this great day, for which the Ukrainian people have been waiting for 332 long years.