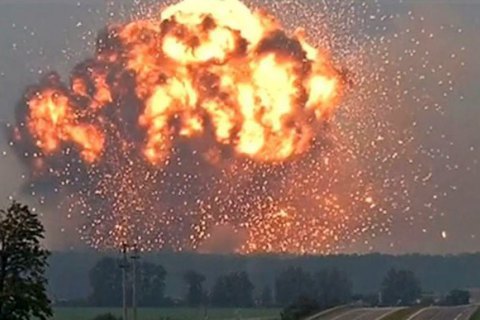 Fire islands near the Ichnya arsenal have been localized, smoke in the area is thinning out, there are one-off detonations of ammunition, the press service of the State Emergencies Service has said.

According to the General Staff, as of 5 p.m. fire units can start extinguishing the fire along the perimeter. Only one third of the arsenal territory is covered by smoke, which provides for a more effective use of drones for monitoring the situation.

Over 12,500 people have been evacuated from Ichnya and 30 nearby villages. The central district hospital evacuated 163 patients to hospitals in Parafiyevka.

The evacuees are provided with food, medical and psychological help.

Gas supply in Ichnya and 11 other population centres was turned off. There is no train or car traffic through Ichnya.

Seven fire trains are on standby in several regions.

There have been no reports about any casualties.

A massive fire broke out at the ammunitions depot in Druzhba, Ichnya District of Chernihiv Region, which was caused by four explosions.

The General Staff suspects sabotage among the key scenarios.