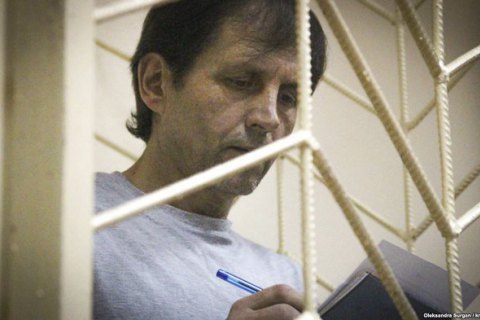 Ukrainian activist Volodymyr Balukh, 47, who has been on a hunger strike in a Russia-controlled prison in Crimea since 19 March, has announced that he has suspended his hunger strike during the transfer from the peninsula to a Russian-based colony.

"Having used the last chance to find a gap in the occupier's punitive system, where the sprouts of common sense or a hint of honor could be warming, I've decided to stop the hunger strike," Balukh wrote in a letter published by RFE/RL's Krym.Realii media project.

He said he would continue the hunger strike upon arrival at the Russian colony. Balukh also asked for his "last will" to be honoured.

"Being aware of the consequences of my effective compliance with the text of this statement, I appeal to you and ask you to fulfill my last will: in case of my physical or mental death, do not leave my body in the occupied territory. I leave it up to my family to choose where to bury me. I would prefer the countryside on the banks of the Dnipro River near Kyiv," the letter says.