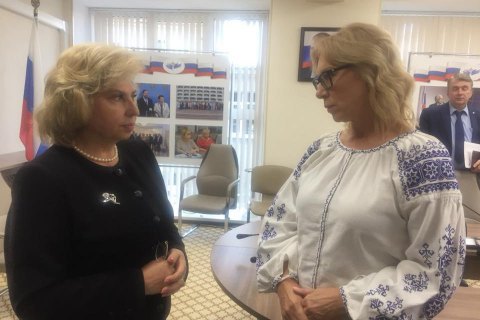 Ukrainian ombudsperson Lyudmyla Denisova has asked her Russian counterpart to provide an official report on the condition of Ukrainian film director Oleh Sentsov, who is serving a term in Russia, and whether he indeed ended his hunger strike.

"I demand that Tatyana Moskalkova provide official information about the hunger strike and health condition of Oleh Sentsov, as well as confirming documents," she said on Facebook.

Russia has neither confirmed nor denied the end of his hunger strike over five days, Denisova recalled.

As reported earlier, on 5 October, the Russian Federal Penitentiary Service (RFPS) said Sentsov has stopped the hunger strike he had been on since mid-May. RFPS Valeriy Maksimenko said in an interview with Russian media that the Ukrainian had almost immediately switched to a regular diet of cereals and chicken meat.

However, the spokesperson for Russia's Yamal-Nenets District, Anatoliy Sak, said that Sentsov did not stop his hunger strike. There is no evidence to support either statement.

On 5 October, Sentsov released a letter saying he was made to finish his hunger strike under threat of force feeding. He said he would make an official statement on the end of the hunger strike on 6 October but there has been no official confirmation of this either.