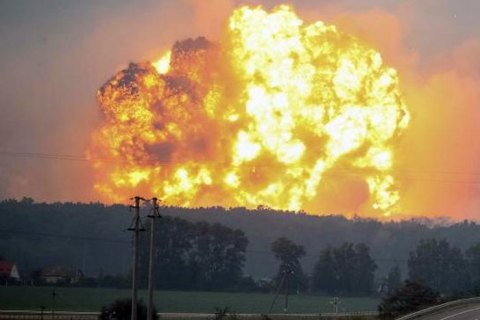 Detonations at an ammunition depot of the 6th arsenal (military unit A-1479) near Ichnya, Chernihiv Region started in different places, the deputy commander of the General Staff, Rodion Tymoshenko, has said at a briefing. He was quoting sentries' reports.

"They have confirmed the fact of explosions, meaning blowing up, in four spots of the arsenal. The explosions happened in different places of the arsenal and caused a fire. According to the information available for now, there were two simultaneous explosions followed by two more at the other end of the arsenal," the general said.

He suggested it may have been an act of sabotage.

Not more than 10% of the arsenal was affected by the incident, he said. He also denied reports about 88,000 tonnes of ammunition stored at this depot.

The explosions and fire at the arsenal started at around 3.30 a.m. on 9 October.