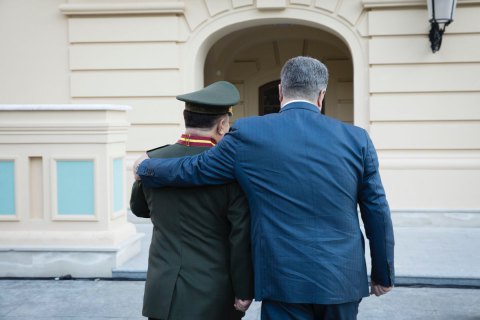 President Petro Poroshenko has dismissed Defence Minister Stepan Poltorak from military service. The president announced this at the official event celebrating Ukrainian servicemen on 13 October, according to UNN.

"Ukrainian Army Gen Stepan Poltorak filed a report to leave military service and I have accepted it. However, in appreciation of Stepan Poltorak's significant contribution to the revival of the Ukrainian Armed Forces, I have offered him to continue to head the Defence Ministry as a civilian," the president said.

Poroshenko recalled that after 1 January, the defence minister must be a civilian person.

Poltorak has been in charge of the Defence Ministry since October 2014. Before this, he was the commander of the Natioal Guard of Ukraine. In 2015, Poroshenko promoted Poltorak to army general.