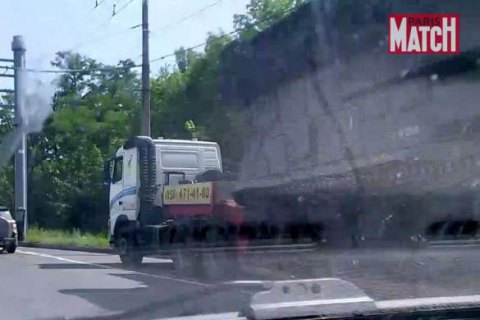 The Security Service of Ukraine (SBU) has identified and detained a militant of the self-proclaimed Donetsk People's Republic (DPR) who was involved in transporting the Buk missile system which was used to shoot down the Malaysia Airlines Flight 17 in eastern Donbas, the deputy head of the SBU main investigations department, Vitaliy Mayakov, has said at a briefing, according to Ukrainian News.

He also played a mobile video recording showing the Buk on a trailer being transported through Donetsk.

"Thanks to this phone video, we have established who owns this trailer. We identified this person from among the militants who took it to a car company in Donetsk. Three years later we managed to detain this unsuspecting person as he was crossing the border in the territory under our control from the Russian Federation. We detained him, he is now serving a sentence here, in Ukraine," Mayakov said. He added that the investigation is checking the involvement of 150 people in this crime.

Mayakov stressed that the DPR militants involved in the transportation of the Buk will be convicted for terrorism in Ukraine.

Later in the day, the spokesperson for the Security Service of Ukraine (SBU), Olena Hitlyanska, clarified that the arrested militant was not the driver of the trailer, although he was involved in the transportation of the Buk. He was convicted by a Ukrainian court in 2017.

Earlier, the secretary of the National Security and Defence Council, Oleksandr Danylyuk, said that the former commander of the air defence of the so-called Slavic brigade of the DPR, Volodymyr Tsemakh, who was detained by the Ukrainian special services has valuable information about Russia's involvement in the shooting down of the aircraft.

On 17 July 2014, the Malaysia Airlines Flight 17 was shot down by a missile from the Buk anti-aircraft missile system in Donetsk Region. All 298 people onboard were killed: 192 citizens of the Netherlands, 44 - Malaysia (including 15 crew members and two babies), 27 - Australia, 12 - Indonesia (including one child), 10 – the United Kingdom, four - Germany, four - Belgium, three - the Philippines, one from Canada and one from New Zealand.

Immediately after the crash, militant commander Igor Girkin reported on the incident: the militants believed that the plane was shot down by the Ukrainian military. The terrorists' "report" to the Russian Intelligence Agency that the downed airliner turned out to be a passenger one was published online.

The international Joint Investigation Team established Russia's involvement in the plane crash, but Russia did not plead guilty. In the spring of this year, Malaysia’s leadership voiced doubts about the results of the investigation: Prime Minister Mahathir Mohamad said that the fact that a Russian-made missile was fired from the territory controlled by Russia from a rocket launcher owned by the Russian army does not prove that these were Russian militants.