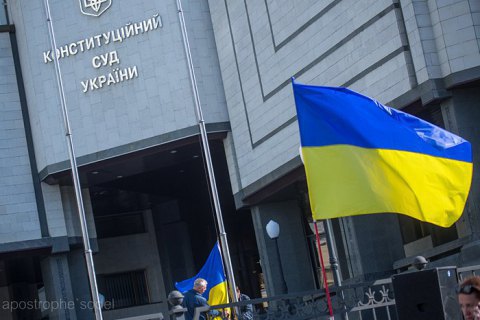 The Constitutional Court has found the Law "On the condemnation of the Communist and National Socialist (Nazi) totalitarian regimes in Ukraine and the ban on the propaganda of their symbols" to be in line with the constitution, Ukrainian News has learnt from its source in the court.

The decision was taken by the court's Grand Chamber on 16 July. The court's website has not been updated accordingly yet.

In May 2017, 46 Ukrainian MPs asked the Constitutional Court to invalidate the so-called law on decommunization passed by the Ukrainian parliament on 9 April 2015. The move was initiated by members of the Opposition Bloc faction.

The law condemns the Communist and National Socialist (Nazi) totalitarian regimes and their symbols. It also provides for the renaming of locations, organisations and trademarks.

A protest against a possible cancellation of the law on decommunization was held outside the Constitutional Court today.