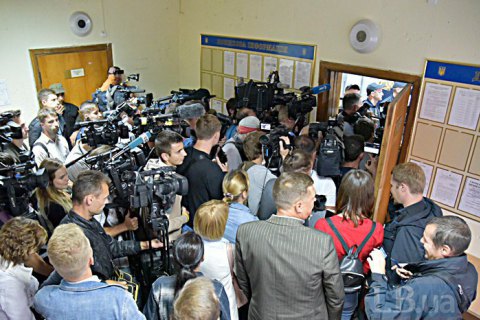 Kyiv's Podilskyy district court has postponed a hearing at which it was to select a measure of restraint for the head of the Russian news agency RIA Novosti office in Ukraine, Kyrylo Vyshynskyy (Kirill Vyshinskiy) until 19 July, an LB.ua correspondent has reported from court.

The hearing was postponed because the jury was in a deliberation room on account of other case.

On 3 July, the hearing was postponed because most prosecutors were on leave.

On 15 May 2018, the Security Service of Ukraine (SBU) together with the Kyiv-controlled Prosecutor's Office of the Autonomous Republic of Crimea exposed a media network controlled by the Russian Federation. The head of RIA Novosti-Ukraine, Vyshynskyy, was detained.

His Russian state awards and Russian passport were found during the search. Criminal proceedings were opened against Vyshynskyy on charges of state treason.

Vyshynskyy has been under arrest since 17 May 2018. On 10 January 2019, it became known that the pre-trial investigation as part of the criminal proceedings against Vyshynskyy was completed, the trial of the case began on 4 April.