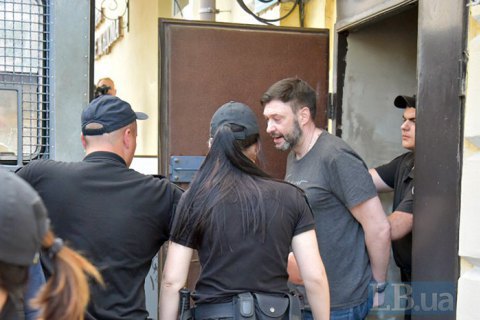 The meeting took place at about 2 p.m. on 10 July on the basis of a written instruction, which Denisova showed to the staff of the remand ward. She did not allow the staff to make a copy of the instruction. Venediktov did not present his documents either.

According to the source, Denisova demanded that Vyshynskyy be taken to a separate room, after which he left Venediktov and Vyshynskyy alone for about 20 minutes.

Denisova told LB.ua that the meeting took place "on the basis of the Law 'On the Representative of the Supreme Council...'" She did not reveal any details of the meeting.

By law, the ombudsperson has the right to enter any institution where detainees or prisoners are held.

On 15 May 2018, the Security Service of Ukraine (SBU) together with the Kyiv-controlled Prosecutor's Office of the Autonomous Republic of Crimea exposed a media network controlled by the Russian Federation. The head of RIA Novosti-Ukraine, Vyshynskyy, was detained.

His Russian state awards and Russian passport were found during the search. Criminal proceedings were opened against Vyshynskyy on charges of state treason.

Vyshynskyy has been under arrest since 17 May 2018. On 10 January 2019, it became known that the pre-trial investigation as part of the criminal proceedings against Vyshynskyy was completed, the trial of the case began on 4 April.

Kyiv's Podilskyy district court is selecting a measure of restraint for Vyshynskyy.