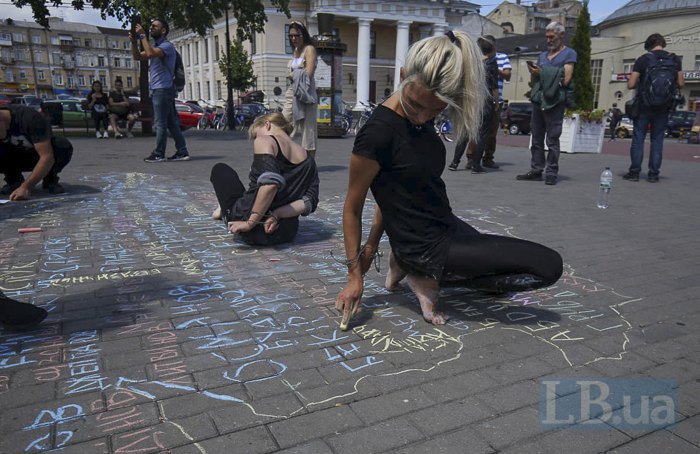 Post Play Lab, a theatre project, has staged a performance in Kyiv to mark the 43rd birthday of Ukrainian film director Oleh Sentsov imprisoned in Russia. They drew a shape of Crimea on the pavement. With their hands tied with barbwire behind their backs, they wrote the names of political prisoners from Crimea. Convicted on trumped up charges, Sentsov has celebrated his birthday behind bars for six years now.

Zelenskyy congratulated Sentsov on Facebook by wishing him good health and saying that he is a "paragon of invincibility and dignity".

During a visit to Kherson Region on 13 July, Zelenskyy introduced his new representative for Crimea, Anton Korinevych. "We will do all we can to keep the Crimea issue on the agenda and ensure the protection of the rights of Ukrainian citizens residing in temporarily occupied Crimea and internally displaced persons as much as possible," Korinevych said.

Zelenskyy has appointed former Deputy Defence Minister Yuriy Husev the head of the Kherson regional state administration. He tasked him with developing the infrastructure at the checkpoints on the administrative border with Crimea in Kherson Region.

Zelenskyy has postponed the appointment of Andriy Andreychykov as head of the Odesa regional state administration. The president said that although he knows Andreychykov personally "there are many people who do manipulations in the mass media". Media recently alleged that the would-be governor sold scrap metal to Moldova's breakaway Dniester region. The head of the president's office, Andriy Bohdan, said that he was Zelenskyy's business partner.

The acting chairman of the State Fiscal Service, Oleksandr Vlasov, has tendered his resignation at the request of President Volodymyr Zelenskyy. The latter demanded that Vlasov step down for not having dismissed the customs chiefs of Volyn, Transcarpathian, Lviv and Chernivtsi regions as Zelenskyy demanded.

Foreign policy advisers to the leaders of the Normandy Four states (France, Germany, Ukraine and Russia) have met in Paris to discuss the implementation of the Minsk agreements, primarily a ceasefire. A source told Russian Interfax that despite their "constructive" stand, "the participants failed to bring their positions closer in a radical manner".

Former President Petro Poroshenko has told ICTV that Russia is likely to release the 24 Ukrainian sailors it captured off the Kerch Strait in November 2018 by 21 July, the date of the snap parliamentary election in Ukraine.

The news TV channel 112 Ukrayina associated with Putin's close ally Viktor Medvedchuk has cancelled the screening of Oliver Stone's "Revealing Ukraine" documentary planned for 16 July, for which it has no license. The film denies Russia's role in the war on Donbas, lacks balance and says the Revolution of Dignity was "controlled from the outside".

On 13 June, someone fired a grenade launcher on the façade of the channel's office.

A pilot got killed when his Mi-2 helicopter crashed down doing crop dusting near the village of Yabluchne in Sumy Region on 14 July.