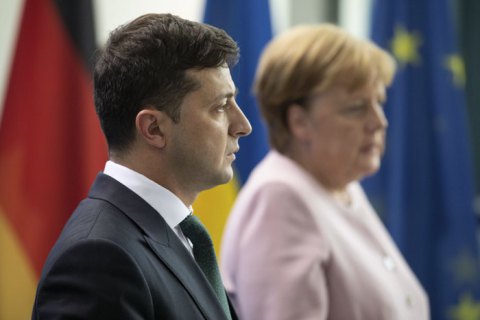 Ukrainian President Volodymyr Zelenskyy and German Chancellor Angela Merkel have had a phone conversation during which they discussed a peaceful settlement for Donbas and ways to ensure gas transit across Ukraine, Zelenskyy's press service has reported.

"The sides discussed ways to further enhance a peaceful settlement of the situation in Donbas. They welcomed the results of the recent meeting of diplomatic advisers in the Normandy format in Paris, which should give impetus to the work of the trilateral contact group. The president of Ukraine and the federal chancellor of Germany highlighted the need to achieve progress in securing the release of Ukrainian hostages and political prisoners in the near future, as well as in the completion of the disengagement of forces and hardware in Stanytsya Luhanska, in particular by dismantling the fortifications and clearing mines," it said.

Zelenskyy and Merkel also discussed further ways to ensure gas transit across Ukraine. Special attention was paid to prospects for the implementation of bilateral investment projects.