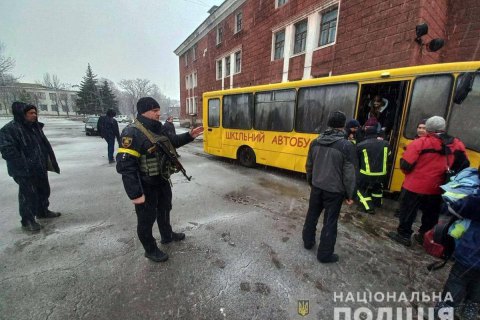 Despite the emergency cessation of evacuations due to shelling by the Russian army, 400 residents were evacuated from Volnovakha in the Donetsk region. In a telegram, this news was announced by the head of the Donetsk Military-Civil Administration, Pavlo Kyrylenko.

“These are the people who were able to get to the settlement on their own the day before. A convoy of evacuation vehicles stopped near them,” said the head of the MCA, adding that people are being taken to a safe place.

“Although today we intended and needed transport to evacuate a much larger number of people, movement of the column had to be stopped as the Russians resumed the ruthless shelling of Volnovakha - it was extremely dangerous to move there,” said Kyrylenko.

The evacuation of people from Mariupol and Volnovakha (Donetsk region) was planned for today – from 9 a.m until 4 p.m, with a state of silence had to be established. But before the evacuation began, the Russian army fired and began to advance using the silent regime. The evacuation was postponed.

Earlier, there was an agreement reached by the Ukrainian and Russian sides during the talks about the provision of humanitarian corridors was.