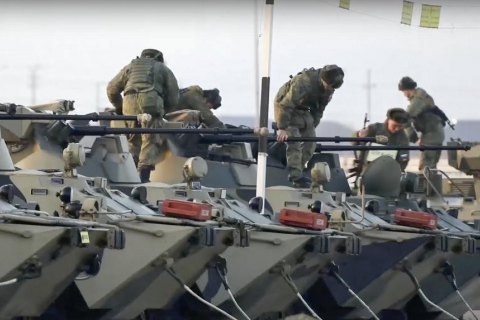 Enemy forces are planning to take control of the Kaniv Hydroelectric station dam, a critical infrastructure object, the press service of the General Staff of the Armed Forces states.

According to the information from the General Staff as of 24:00 on 5 March 2022, the enemy continues its advance in Ukraine. Russian troops are focused on surrounding Kyiv, Kharkiv, and Mykolaiv; gaining access to the administrative borders of the Luhansk and Donetsk regions; and establishing a land connection with temporarily occupied Crimea.

The airstrikes targeting military and civil objects in Kyiv and Zhytomyr were executed by SU-35S, SU-34, SU-25 jets. The fighter planes took off from the airfields in Belarusian Baranovichi, Luninets, and Lida. SU-34 bombers that took off from the Buturlinovka airfield struck infrastructure objects near the city of Sumy.

A concentration of the Belarusian military units was detected near Hrushka (Maloritsky district) and Khotyslav. Russian troops from the Eastern military district, the Pacific fleet, and the airborne troops amounting up to 18 BTGs operate near Polissya, Kukhari, Borodyanka, Byshiv, Gorenichi, and Demidov. According to the available data, after regrouping, the units of the Eastern military district and airborne troops, both of which suffered significant losses near Hostomel airport, redeployed the units of the 76th assault division in the Bilogorodka direction.

The enemy attempts to approach Kyiv from the southwest direction. In the Seversky direction, a group of troops from the Central military district that consists of up to 12 BTGs formed from the units of the 41st and 2nd all-military armies and the 90th tank division is conducting an offensive operation in northeastern Ukraine. The group of troops from the Central military district with forces of up to 12 BTGs (units from the 41st, 2nd all-military armies and 90th tank division) is advancing in the Seversky direction in the northeast of Ukraine.

About 100 units of armaments and military equipment, including TOS-1 “Buratino”, are moving towards Kozelets’.

In the Brovarsky direction, the enemy troops continue to regroup. Units are advancing in the direction of Peremoga. The invaders are trying to approach the Brovary-Boryspil highway.

In the Slobozhansky direction, the general army unit no.6 and tank army unit no.1 from the Western military district prepare to advance towards Chernihiv and Nizhyn. The Western division group of about 23 BTGs made up of the 1st tank and 20th general armies, as well as the 14th army corps of the Northern Fleet both, have regrouped after having suffered significant losses and now plan to resume the offensive in the direction of Lubny, Poltava, and Kharkiv.

In the Donetsk direction, the enemy is trying to advance towards Dnipro and Zaporizhia with forces of up to 7 BTGs from the 1st, 2nd army corps and 150th motorized infantry divisions.

In the Severodonetsk direction, the enemy with forces of up to 2 BTGs is trying to advance towards Izyum. The troops are accumulating manpower and equipment to resume the offensive after they were stopped near the Seversky Donets river.

In the Mariupol direction, the enemy continues to block the city of Mariupol and shell civilian objects.

In the Mykolaiv direction, up to three BTGr from the 7th airborne assault division of airborne troops carried out an offensive towards Mykolaiv. The enemy suffered significant losses and did not succeed in its attack.

In the Zaporizhia direction, Russian troops of up to three BTGr together with the aviation forces are advancing towards Nova Odesa and Mykolaiv.

In the Southern Buh and Bessarabian directions, troops are currently on high alert in the self-proclaimed Transnistrian (PMR) region.

The enemy’s morale is low. The majority of Russian soldiers don't want to fight. At the same time, the head of unrecognized Transnistria, Krasnoselsky, doesn’t rule out the possibility of PMR's armed forces joining Russia in the war against Ukraine.

In the last 24 hours, the enemy suffered significant losses, both in personnel and equipment. Four helicopters, five fighter jets, and one drone were shot down. Ukrainian forces carried out several airstrikes targeting military equipment columns. Russian losses are yet to be determined.

Russian troops continue to flee, leaving their military equipment behind. One of the Ukrainian troops seized about 30 armored fighting vehicles, cars, and tanks to use them for their own needs.

Earlier, the General Staff of the Armed Forces noted five changes in the enemy’s tactics. Yet Russia’s objectives remain the same — surround Kyiv and weaken the resistance in the occupied cities.