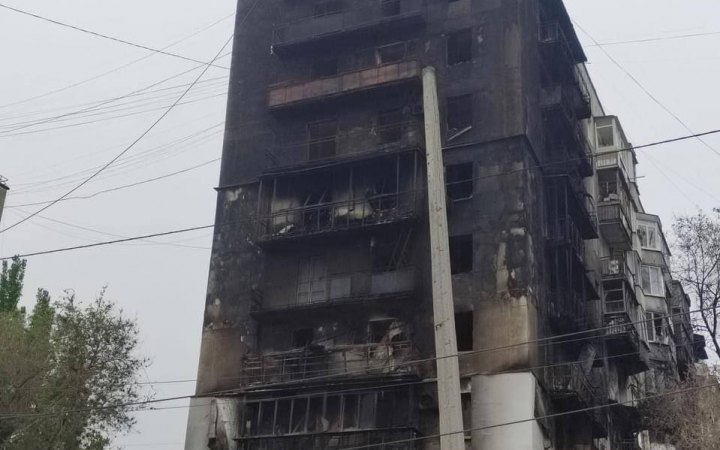 The situation in the areas of hostilities remains tense and shows signs of further aggravation. The russians are firing intensely along the entire line of contact and trying to hit the depths of the defense's forces with artillery. This is happening in the Donetsk operational district and in the direction of Slovyansk, said the spokesman of the Ministry of Defense of Ukraine Oleksandr Motuzyanyk at a briefing.

The enemy also focused on maintaining the occupied frontiers and trying to replenish weapons.

“The aggressor is defining new boundaries for the launch of missiles on the territory of our country. As intelligence has learned, russian crews of long-range Tu-22 bombers worked out conditional missile launches from the northern part of the temporarily occupied territory of Crimea,” Motuzyanyk said.

The situation in the directions and in the operational zones:

In the Kharkiv direction, the Armed Forces oppose enemy units. The enemy is trying to hold the occupied frontiers and is firing from artillery systems. In particular, there was shelling in the Dementievka area, 27 km from Kharkiv. In some areas, defenders have crossed the state border, but some settlements remain temporarily occupied.

In the Sloviansk direction, the defenders repulsed the attacks of several units. The enemy engaged air troops and focused on the offensive. Artillery is being fired at in the south and southwest of Izyum.

Intense fighting continues in the Lyman, Severodonetsk, and Bakhmut areas. The enemy's goal is to surround our troops in the Lysychansk and Severodonetsk districts. In Bakhmut, defenders are holding back the offensive of a group that is trying to seize new frontiers in the Popasna area.

In Kurakhivsky direction, the russians, with the support of artillery and aircraft, are trying to move forvard in the direction of Novomykhailivka, 10 kilometers from Marinka.

South Bug and Tavriya directions - the occupiers are trying to keep the occupied frontiers, conduct reconnaissance, building engineering equipment for the positions, and logistics.

The situation in the Kryvyi Rih and Kherson areas is without significant changes. The enemy is firing artillery at our troops and trying to equip a second line of defense.

In the northern direction, the enemy conducted air reconnaissance in the Chernihiv and Sumy regions. There is a threat of missile strikes and artillery shelling of border areas.

There are no significant changes in Volyn and Polissya. Belarusian troops of up to seven battalions continue to reinforce areas along Ukraine's border. The threat of missiles and air strikes remains.

Ships of the Black Sea Fleet in the Black and Azov Seas conduct reconnaissance and provide fire support to troops.

“According to our intelligence, as of today, two ships with a total volley of up to 16 Caliber naval-based cruise missiles are ready for use in the Black Sea,” Motuzyanyk added.

Ukrainian troops are conducting a defensive operation and inflicting losses on manpower and equipment.

It will be recalled that the estimated losses of the enemy from February 24 to May 20 amounted to 28,700 people, 1,263 tanks, and 13 ships and boats. The russians suffered the greatest losses yesterday in the Bakhmut direction.