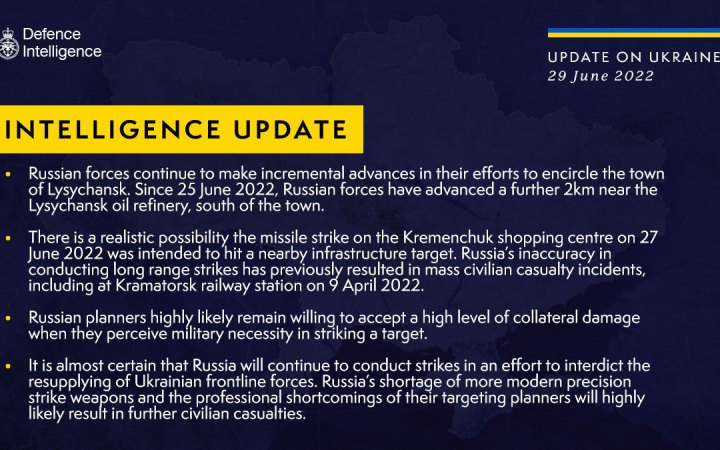 There is a "realistic possibility" the missile strike on the Kremenchuk shopping centre on 27 June 2022 was intended to hit a nearby infrastructure target, the UK Ministry of Defence said in the Latest Defence Intelligence update on the situation in Ukraine.

"Russia’s inaccuracy in conducting long range strikes has previously resulted in mass civilian casualty incidents, including at Kramatorsk railway station on 9 April 2022," the ministry recalled, adding that "Russian planners highly likely remain willing to accept a high level of collateral damage when they perceive military necessity in striking a target".

It is "almost certain" that Russia will continue to conduct strikes in an effort to interdict the resupplying of Ukrainian frontline forces, it predicted.

Russia’s shortage of more modern precision strike weapons and the professional shortcomings of their targeting planners will "highly likely" result in further civilian casualties, it warned.

The Ministry of Defence also noted that Russian forces continue to make incremental advances in their efforts to encircle the town of Lysychansk. Since 25 June 2022, Russian forces have advanced a further 2km near the Lysychansk oil refinery, south of the town.