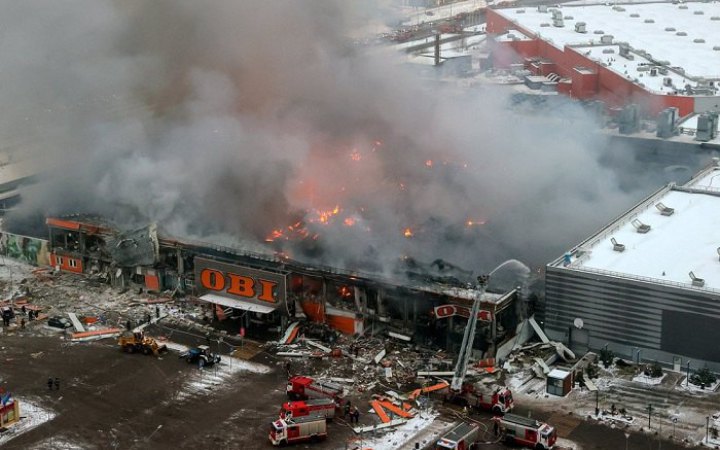 Footage from the fire scene of the Mega Khimki shopping centre
Photo: TASS

Explosions at air bases in Russia and "cotton pops" (blasts - Ed.) in Belgorod and other regions of Russia prove that the war with Ukraine concerns every Russian, said Yuriy IHnat, spokesman for the Ukrainian Air Force Command, during a telethon.

According to him, Russians now do not understand whether they can be safe even in the rear regions of the Russian Federation.

"As you can see from the news, the "cotton pops” are heard through the airfields, and the occupiers have "disappeared" somewhere. But they did not disappear, in military terminology, it is called dispersal. They scattered their strategic aviation to different airfields, wherever possible. In particular, where there are runways they can use," Ihnat said.

According to him, the Russian military and civilians, who said that the "special operation" had nothing to do with them, now understand that they will not escape the war.

"Now you can't be safe anywhere. This is not the first time we have seen such "cotton wool". There was Crimea and the Millerovo airfield at the beginning of the aggression," Ihnat noted.

He stressed that all these incidents on Russian territory have a psychological impact on civilian and military Russians. After all, now there are power supply problems not only in Ukraine but also in Belgorod.

"This should be a serious psychological factor of influence, besides the military one, on the population of Russia and its army. Now it is not clear whether even their rear regions are going to be safe," Ihnat said.

On 5 December, explosions occurred at two Russian airfields. At the airfield in Ryazan Region, nine people on duty were injured and burned, three of them died, a refuelling vehicle was destroyed, and an unknown aircraft was damaged.

The same morning, explosions were heard at the Engels airfield in Saratov Region, 700 km from Ukraine. Two bombers were damaged. It was from this airfield that Russian bombers took off to strike Ukrainians.