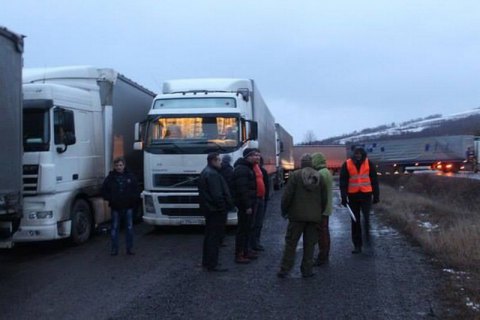 The government has instructed the Interior Ministry, the Foreign Ministry, the Infrastructure Ministry and the Economic Development Ministry to work out by Monday a decision on the blockade of Russian lorries in western Ukraine.

The issue was raised by Infrastructure Minister Andriy Pyvovarskyy at the government meeting on 12 February, Interfax-Ukraine learned from his press service.

The Infrastructure Ministry said that Ukraine and Russia had exchanged a certain number of transit permits. The exact quota is yet to be agreed in the course of negotiations due in January-March 2016.

Russia has blocked the transit of Ukrainian goods to Asia since the beginning of the year.

Poland has denied entry to Russian lorries since 1 February, which forced them to change their route to Europe by crossing Ukraine to Slovakia and Hungary.

This prompted a civil blockade of Russian lorries in western Ukraine, namely in Transcarpathian, Volyn and Lviv regions.