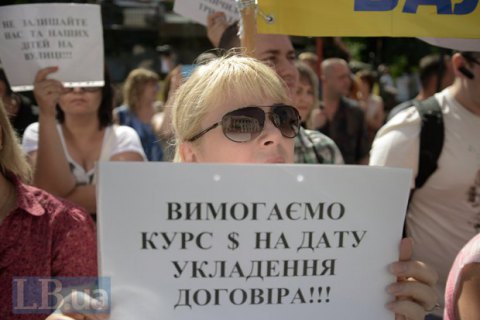 The Ukrainian parliament has put at rest bill No 1558-1 on the restructuring of loans denominated in foreign currency, which was vetoed by President Petro Poroshenko.

The head of state suggested the bill should be rejected, but was only supported by 101 MPs. However, there were even fewer MPs, 54, who attempted to override the veto.

Thus, the bill is considered cancelled.

Bill 1558-1, also known as the bill on "the dollar for 5 hryvnyas", was passed on 2 July without consideration under the pressure of the crowd which gathered outside the parliament building and de facto blackmail by the factions of Self-Help, Fatherland and the Radical Party. The Finance Ministry and the National Bank of Ukraine said that the implementation of the law would cost the state 95-100bn hryvnyas, which will inevitably trigger a collapse of the Ukrainian financial system. The next day after the vote, MPs started to call off their votes.