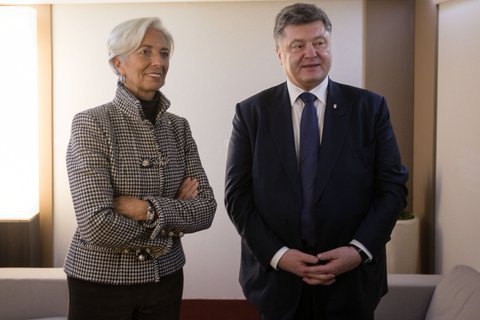 Ukrainian President Petro Poroshenko has met the head of the International Monetary Fund, Christine Lagarde, in Davos on the sidelines of the World Economic Forum in Davos.

Poroshenko's press secretary Svyatoslav Tseholko on Twitter described the negotiations as fruitful. In his words, Lagarde said she hoped the IMF would approve the second review of the loan programme and issue Ukraine with the next tranche. They also discussed the course of reforms in Ukraine.

The Interfax-Ukraine news agency confirmed that Lagarde was optimistic about the next tranche for Ukraine.

“We had a very good discussion that will hopefully the conclusion of the negotiations on the memorandum which our teams are working on. And if they are successful in concluding this process, which I hope, we will be able to hold a board meeting in the near term to complete the second review,” she said.

For his part, Poroshenko said: “We have reached an agreement and I believe the ambitious programme of reforms will help Ukraine in 2016. I am grateful to Christine Lagarde for that.”