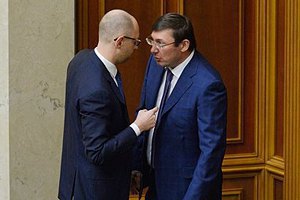 Prime Minister Arseniy Yatsenyuk and the leader of the Petro Poroshenko Bloc faction, Yuriy Lutsenko, on 18 February stopped short of engaging into a brawl during the meeting of the so-called "strategic seven" where the format of a new Cabinet of Ministers was discussed, LB.ua has learned from its sources.

There were three options on consideration. Under the first one, the Petro Poroshenko Bloc and the People's Front share posts and responsibility in half, with Bankova [presidential administration] expressing public support for Yatsenyuk. Under the second one, the People's Front claims all posts but also undertakes full responsibility, with the Petro Poroshenko Bloc guaranteeing 100 votes in support of the Cabinet of Ministers' initiatives. The third one concerns Yatsenyuk's voluntary resignation.

While discussing the options, the sides agreed that the first option would not be supported by the Petro Poroshenko Bloc faction. When Lutsenko added that he considered Yatsenyuk's resignation to be the most acceptable solution to the current situation, the Cabinet of Ministers head lost it. A verbal exchange followed, during which Yatsenyuk accused Lutsenko of accepting oligarchs' money when he was the interior minister. Lutsenko replied by saying that when he was in prison as one of the leaders of the opposition, Yatsenyuk allegedly cooperated with the regime of Viktor Yanukovych. A fight was prevented by Lozhkin and Hroysman, who tamed Yatsenyuk.

On 16 February, parliament failed a vote of no-confidence in the Cabinet of Ministers, thus giving the government a chance to continue its work until September at least.