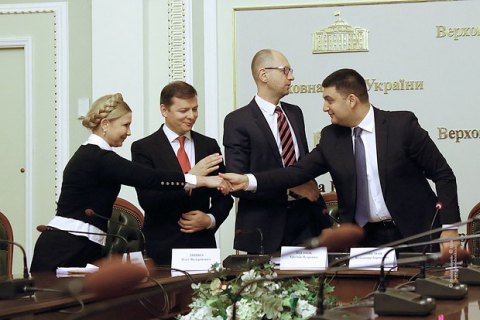 Prime Minister Arseniy Yatsenyuk has said the talks are under way to bring Oleh Lyashko's Radical Party back into the parliamentary coalition.

The prime minister said this at a government meeting, according to 112 Ukraine TV.

He said that he had already met the president, the leaders of the Petro Poroshenko Bloc and People's Front and Lyashko.

He also described the developments in parliament as "fight for power" and urged unity among all coalition partners and the president.

The European Ukraine coalition, consisting of five factions - the Petro Poroshenko Bloc, the People's Front, Self-Help, Fatherland and the Radical Party, was formed on 27 November 2014. The Radical Party remained a coalition member between December 2014 to September 2015.

Fatherland left the coalition on 17 February 2016.