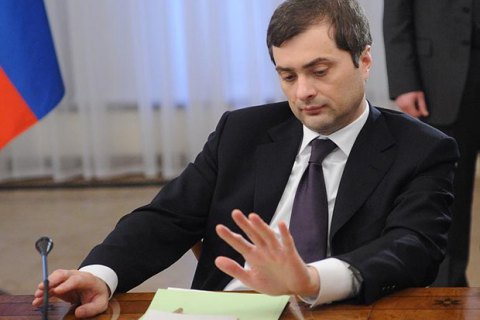 Vladislav Surkov, the Russian president's aide, paid a visit to separatist-controlled Donetsk on 16 February, the head of the apparatus at the Security Service of Ukraine (SBU), Oleksandr Tkachuk, has said at a briefing.

"An aide to Russian President Putin, Vladislav Surkov, was in Donetsk on 16 February. The Russian side took great care to hide preparations for the visit. During the visit, Russian national Vladislav Surkov heard the reports of the heads of local 'administrations', got acquainted with the current details of the socio-political, military-political and humanitarian situation in the region," he said.

He added that they also discussed preparations for elections in the separatist-controlled areas of Donbas.

Surkov also discussed some personnel issues. "According to our information, the so-called foreign minister of the DPR [self-proclaimed Donetsk People's Republic] as well as the head of the DPR leader's administration, [Maksym] Leshchenko, and the acting Debaltseve mayor are facing a great risk of dismissal," Tkachuk said.

In his words, Surkov paid a similar visit to Luhansk Region in late January.

"This shows that the leadership of the puppet 'republics' is under the close control of Russian political circles," he said.

Surkov is believed to be the Kremlin supervisor of Donetsk and Luhansk separatists.