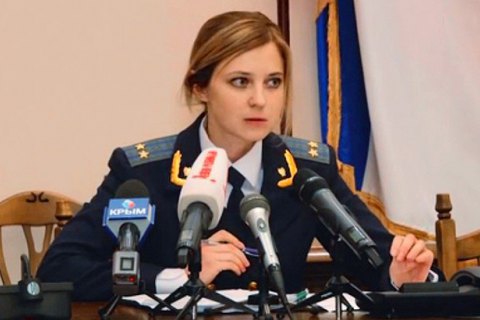 The so-called prosecutor of Russia-annexed Crimea, Natalya Poklonska, has asked the supreme court of Crimea to ban the Crimean Tatar self-styled government Majlis on the peninsula.

According the Russian TASS news agency, her motion is based on article 9 of the federal law "On counteraction to extremism".

She said that she was asked to ban the Majlis by Crimean Tatars, including its organizers. She handed the copy of her motion over to Majlis deputy head Nariman Dzhelyalov "because Majlis chirman Refat Chubarov is hiding from justice and is wanted for crimes with which he was charged".

Crimean Tatar houses on the peninsula were searched on 11-12 February. She said that four people had been detained on suspicion of their connection with the Hizb ut-Tahrir radical group.

Ukraine complained to the UN Security Council head over criminal persecution of Crimean Tatar by the Russian occupying troops.