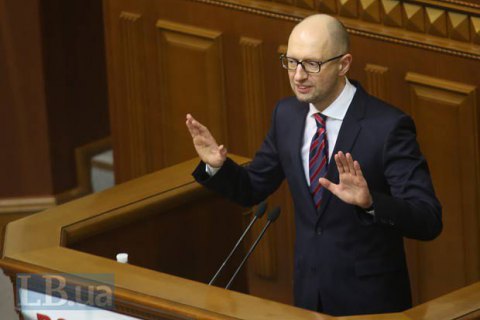 The Ukrainian parliament has failed the vote of no confidence in the government. The draft resolution on no confidence was supported by 194 MPs, thus failing to score the minimum of 226 votes required for passing the decision.

Shortly before the vote, the MPs urgently collected 159 signatures (minimum 150) to put the Cabinet of Ministers' dismissal up for vote. The draft resolution was sponsored by the head of the propresidential Petro Poroshenko Bloc faction, Yuriy Lutsenko.

The draft resolution was supported by 136 MPs of the Petro Poroshenko Bloc, 28 non-affliated MPs, eight MPs from the Opposition Bloc, 25 MPs from Self-Help, 15 Radical Party MPs, six MPs from the People's Will group and 15 Fatherland MPs. The prime minister's People's Front and the Revival group did not give a single vote.

Earlier, parliament recognized the government performance in 2015 as unsatisfactory.

Thus, Arseniy Yatsenyuk has kept the post of prime minister but he is facing hard time taking government bills through parliament.