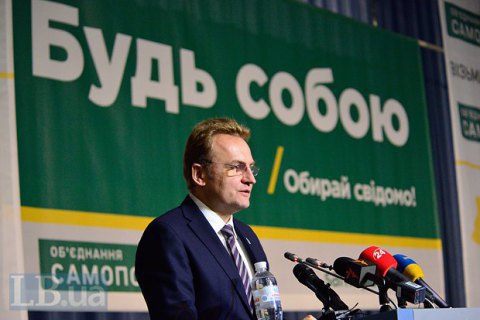 The Self-Help minor coalition party faction has decided to leave the parliamentary coalition. The decision was made at the party board's emergency meeting on 18 February, its faction leader Oleh Berezyuk has said at a briefing.

"On 16 February 2016, the Ukrainian people witnessed a clear collusion between the country's senior leadership, on the one hand, and parliamentary forces under their control, on the other hand. An attempt to finally cement the power of kleptocracy and oligarchy in Ukraine took place [...] Further stay of the Self-Help union in an alliance with the political forces which took part in the oligarchic coup in parliament is impossible and its participation in the parliamentary coalition is over," the party said in a statement.

If a new coalition is not formed within a month after the current coalition collapses, the president will have the right to disband parliament. President Petro Poroshenko earlier said that he would do so only in the extreme case.

Aso, Oleh Lyashko's Radical Party said on 18 February that it was ready to negotiate a new coalition with the Petro Poroshenko Bloc and the People's Front, though on certain conditions. If they reach an agreement, together they will have 238 MPs.