Gorshenin Institute carried out an all-Ukrainian sociological survey, entitled "Social and political sentiments of Ukrainians", from 8 to 17 February 2016. Overall the sample, based on the key social and demographic characteristics of the Ukrainian population, included 2,000 respondents aged 18 and above from all regions of Ukraine (excluding the occupied territories of Crimea, Donetsk and Luhansk regions). The quotas included an area of residence, gender and age of respondents. The margin of error does not exceed +/-2.2 per cent. Based on the survey conclusions, the experts at Gorshenin Institute have summarized the following noteworthy trends:

Only one fifth of respondents approves of how the situation in the country is developing. Ukrainians say there are no results of reforms. Only 21.2 per cent believe Ukraine is actually carrying out reforms. Of them 3.4 per cent are certain that they are being implemented and 17.8 per cent are less certain. Some 71.5 per cent believe there are no reforms under way at all. This includes 29.9 per cent who are less certain and 41.6 per cent who are absolutely certain of this. Last year we asked the same questions and got the same figures in response. In February 2015, there were 20.2 per cent who said that reforms were under way while 70.8 per cent said there was none. We can see a trend when the perception of reforms is worsening among those who think that they are not being implemented: there were 44 per cent in 2015 and there were 29.9 per cent in 2016 who thought there were no reforms but were not confident about it; and there were 26.8 per cent in 2015 and 41.6 per cent in 2016 who strongly supported this sentiment. During a quality assessment (in focus groups) respondents mostly mentioned progress in police and defence reforms. 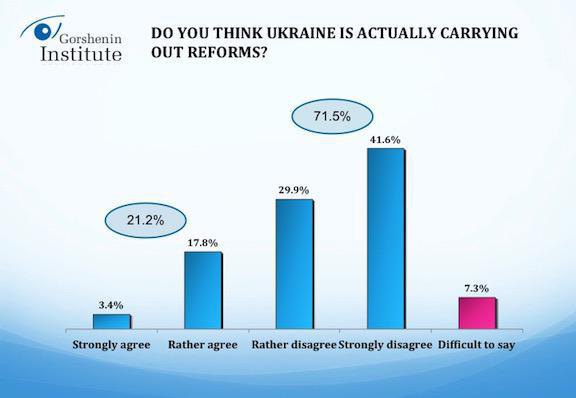 The majority of respondents are not ready to sacrifice their wealth for reforms. Only one fifth of society is ready to suffer material hardships for the success of reforms (22.1 per cent) and almost 75 per cent are not ready for this (73.1 per cent). This opens a wide window of opportunities for populism-leaning forces.

Overall, we should note a high level of mistrust in all government institutions, political leaders and political parties. None of the politicians has a positive balance of trust to mistrust. We also observe a serious level of trust in civil society and volunteers' movement. The total crisis of trust shows that people do not see politicians and political parties as the ones who express their interests. Therefore we can only say there is a demand in society for a new political force. 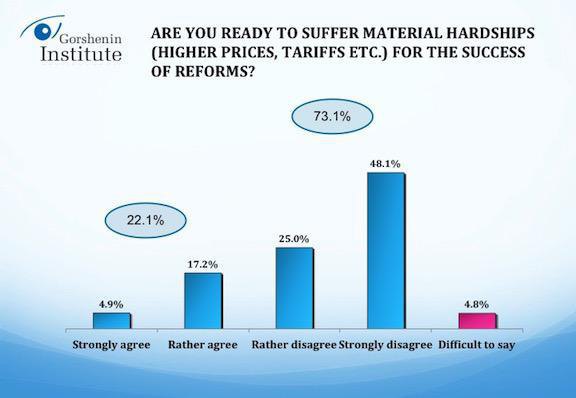 Andriy Sadovyy and Mikheil Saakashvili have the best approval to disapproval ratio. 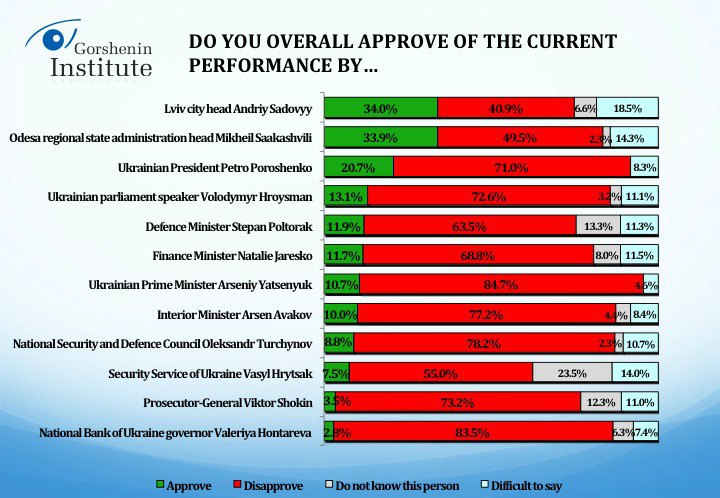 Petro Poroshenko is still the leader of the presidential rating. He enjoys fairly stable support. The president's activity is approved by 20.7 per cent of respondents. Considering that the political spectrum is very fragmented, this allows Poroshenko to continue enjoying the highest voter support. If the presidential election were held next Sunday, the incumbent president will receive 17.2 per cent of votes. It should be noted that his electorate is rather stable. Poroshenko enjoys permanent support of about 15-20 per cent of voters. Partially, this is a so-called progovernment electorate represented by people who are always ready to vote for the incumbent authorities.

We can point out two main groups on the presidential rating. The first group includes its leader Petro Poroshenko and runner-up Yuliya Tymoshenko (17.2 per cent and 15.9 per cent respectively). The second group includes politicians whose political ratings are close to 11 per cent and the differences between them are within the margin of error. These are Andriy Sadovyy, Oleh Lyashko, Anatoliy Hrytsenko and Yuriy Boyko. Such closely-knit results do not allow us to say who is more or less ahead of others in their group.

It is favourable for Poroshenko with his relatively low rating that there is a big number of other candidates with low ratings who "dilute" the remaining field. At the same time, the situation does not benefit Tymoshenko because the field of her potential supporters who are unhappy with the incumbent authorities is prone to heavy dilution by a big number of other contenders. 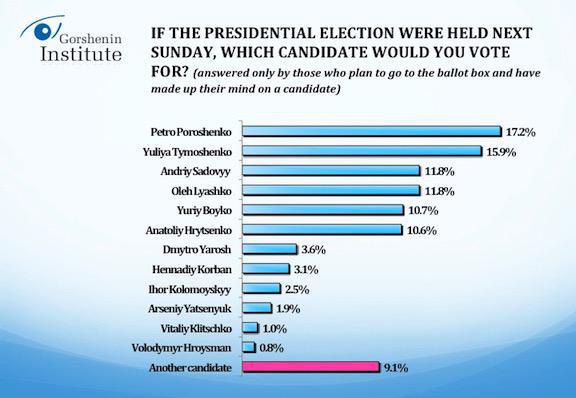 The spectrum of Ukrainian voters' political preferences is very fragmented. Eight political parties would make it to parliament, according to the survey. What we see is political parties being blurred. Five parties go neck to neck with their ratings varying slightly from 10 per cent to 13 per cent. There are 20.3 per cent of those who found it difficult to choose a political party to vote for. Serious changes in the political field are only possible if the agenda is updated or new political players become active.

It should be noted that public sentiments are infantile as a result of which political parties using populist slogans have high ratings. 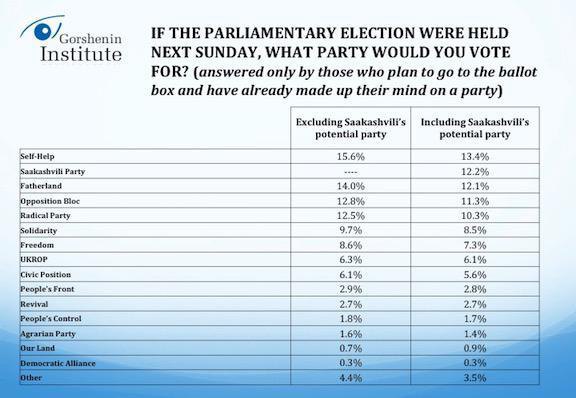 The armed forces and police enjoy the highest trust of Ukrainians among other uniformed agencies. The army is trusted by 48.8 per cent, police by 34.3 per cent, and mistrusted by 43 per cent and 51.7 per cent respectively. It should be noted that unreformed police (militsiya) was only trusted by 8.1 per cent and mistrusted by 85.4 per cent. Trust in the newly-formed police (above all in the patrol police) is only forming because not all the regions have new patrols yet and specific achievements are not visible yet. 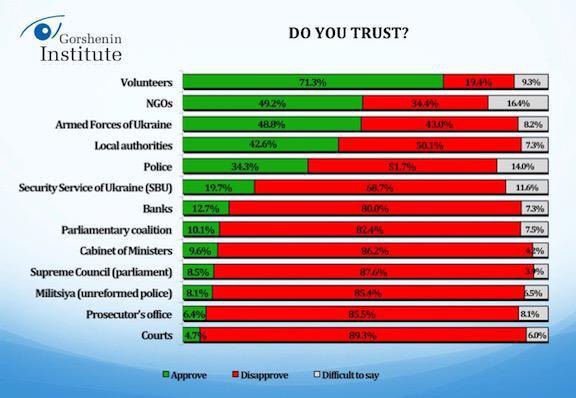 Next week Gorshenin Institute is planning to present the second section of the sociological survey entitled "SOCIAL AND POLITICAL SENTIMENTS OF UKRAINIANS". Follow the announcements.