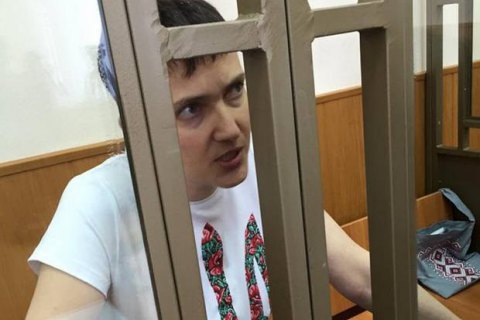 Ukrainian Nadiya Savchenko has suspended her dry hunger strike until the sentence.

"If you decide that the sentence will be in two weeks or at the end of April or in six months… If you want to show your force – you are welcome, but remember that you are playing with my life. I will continue dry hunger strike if the sentence is pronounced later than in a week," she said in court.

After this, the judge announced that the reading of the sentence would start at 11 am on 21 March and be over the following day. It is still unclear whether Savchenko will continue hunger strike.

The sitting of the court finished with singing the anthem of Ukraine by Savchenko and a group of supporters.

"She continues her hunger strike. Now we are trying to persuade her again to stop this but she refuses," he said.

Another lawyer Nikolay Polozov added that Savchenko did not stop dry hunger strike.

"Already today we are facing new symptoms, she has worsened work of the heart, tachycardia plus disorder of thermal control," he said.

"There are almost two weeks before the sentence, but a person is unable to endure hunger strike so long. She will either be forcely fed or die," Polozov pointed out.

According to him, to save Savchenko, the Russian government can already now promise to return her back to Ukraine.

"If the Russian government clearly tells Nadiya that the decision on her case will be made in the near future and she will be extradited to her Motherland, we have very big chances for her to stop this hunger strike," the lawyer said.

As noted before, the prosecution demands 23 years of prison for the Ukrainian.