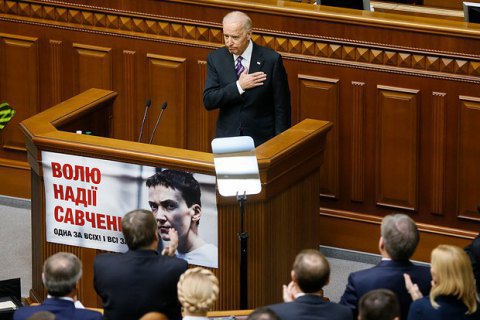 US Vice-President Joe Biden has demanded that Russia immediately release Nadiya Savchenko, according to the White House press service.

Biden recalls that Savchenko was unfairly arrested in Russia in 2014 and has been under custody on the fabricated charge ever since.

"Nadiya served her country in the Armed Forces of Ukraine fighting in the eastern part of the country, when she was captured by separatists and brought through the border against her will," he pointed out.

"For the last 20 months she has become the symbol of Ukrainian national pride and force. She was even elected to the Parliament being in jail. Her illegal imprisonment is a vivid violation of Russia’s obligations within the Minsk agreements and she must be released immediately. Lately, Nadiya has started a new hunger strike as a protest against her detention, and her health has worsened after five days without food and water," he added.

"Today, when we celebrate the International Women’s Day and honour all brave women fighting against injustice in the world, we are together with Nadiya and the Ukrainian people. We call on Russia to make the right choice – to withdraw all charges and release her immediately. Nadiya deserves to come back home to her relatives and friends and join her colleagues in the Parliament to start creating new Ukraine," the US Vice-President finished his speech.

On 7 March, Ukraine appealed to the EU and the USA to turn up pressure for Savchenko's release.

On that very evening, the European Union published the press release with the demand to release the Ukrainian.

Later, US Secretary of State John Kerry spoke with the similar demand.