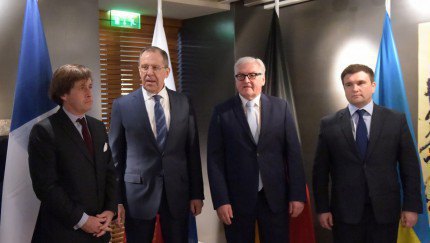 The negotiations in the Normandy Four format at the level of foreign ministers turned out to be fruitless, with the sides failing to reach a unified position on elections in separatist-controlled areas of Donbas.

Foreign Minister Pavlo Klimkin has said on Twitter: "There are no conclusions. Our position lies in security first of all." At the same time, the Minister appealed not to pay attention to "various interpretations" of the held meeting.

According to the head of the Russian Foreign Ministry, Sergey Lavrov, the offer to achieve agreements on conducting local elections by July was offered by "our German and French colleagues", the Interfax agency citing.

Foreign Minister Jean-Marc Ayrault hopes that the law on elections in Donbas will be passed by the Verkhovna Rada. "We hope that the elections (will take place – ed.) by the end of the first half of 2015," Ayrault told journalists.

The head of the German Foreign Ministry, Frank-Walter Steinmeier, in his turn, frankly complained about the absence of progress at the negotiations in Paris, "Sometimes I have such an impression that Moscow and Kiev... do not realize the seriousness of the situations, the pressure we are facing." "Surely, this hanging about is not enough to stabilize the situation in the long-run prospect", the German Foreign Ministry cities Steinmeier.

According to the AFP news agency, the ministers also called all the sides of the conflict in the east of Ukraine "to release and exchange all the imprisoned being illegally in custody." According to the foreign ministers, this procedure is to be completed by 30 April.