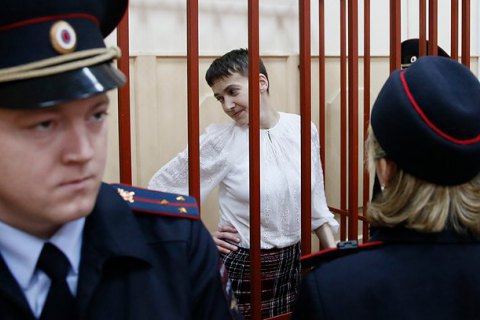 Ukrainian MP and pilot Nadiya Savchenko held in Russia has said at a hearing in the Donetsk city court, Rostov Region that she refuses to be exchanged for Russian servicemen Aleksandr Aleksandrov and Yevgeniy Yerofeyev. She added she may go on a "dry" hunger strike if it takes more than two weeks for the court to come up with a final ruling.

"The Russian authorities were proven guilty in this court. They are guilty of seizing the Ukrainian territory, seizing Crimea, and waging the war in Donbas. They are guilty of trying to install their Russia-dominated totalitarian regime with the help of their undeclared, mean wars all over the world. They stick their nose into everything and destroy an entire population through genocide. We could see this in Chechnya, Abkhazia, and now we can see this in Ukraine, Dagestan and Syria," she said in her speech in court, as broadcast by RFE/RL.

"The only guilt not proven by this court is mine. I am an officer of the Ukrainian Armed Forces. I was fully entitled to defend my land, I was doing my duty," she added.

Savchenko suggested Oleп Sentsov and Oleksandr Kolchenko, Ukrainian nationals charged with terrorism in Russia, had better be exchanged for the Russian intelligence officers held in Ukraine.

"I am not up for trading, I am an innocent person, my guilt has not been and cannot be proven. Therefore there can be no exchange, haggling or buying time. I will not wait for this to happen," she said.