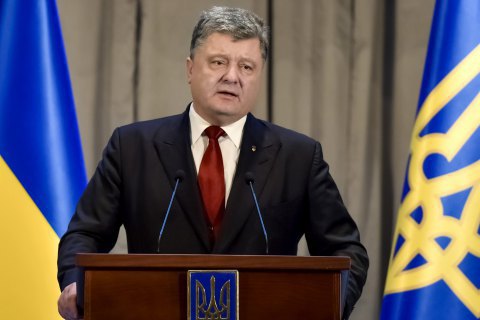 Avellum, a company providing legal counsel for President Petro Poroshenko, has said that opening companies in a foreign jurisdiction is the only way to transfer the president's assets into a blind trust.

"Opening companies in a foreign jurisdiction was the only possible way to transfer assets into management by a reputable international trust," the law firm said in its press release.

It added that institutions working in foreign jurisdictions are required and used namely for the purpose of transferring assets into a blind trust. The company noted that the agreement on the establishment of a blind trust had already been signed.

"These companies did not open any bank accounts, neither did they make any financial transactions. Therefore any allegations of tax evasion are ungrounded," the lawyers said.

Avellum said that the companies' statutory funds were not paid, their shares owned by Poroshenko have no face value therefore they were not to be declared under the Ukrainian legislation. What is more, even after the assets are transferred into a blind trust, the payments will be received by a Ukrainian legal entity therefore all taxes will be paid in accordance with the Ukrainian law and profit will not leave Ukraine.

The president found himself at the epicentre of a scandal after the publication of an investigation based on the disclosure of a Panamanian offshore data logger. It turned out that in the summer 2014, Poroshenko registered a company for the transfer of his confectionery business into the jurisdiction of the British Virgin Islands.

Journalists mostly lashed out at Poroshenko because he had not indicated the possession of 1,000 dollars worth of shares in the company, had not completed the transfer of his Roshen company into a blind trust, and because they suspect him of seeking to evade paying taxes in Ukraine during the sale of the corporation.

Poroshenko instructed his lawyers to clarify the situation